What You Can Expect On Your First Day Living In Yakutsk

It’s weird to think of Yakutsk as my city of residence but that’s what it is.

I never felt that way about Banda Aceh or Jakarta, maybe because from the minute I arrived in both places I knew that I had no desire to stay beyond my appointed time.

I’ve grown from that mindset and now I’m pretty willing to stay where God has assigned me for as long as He wants me there.

So making the transition to thinking of this as my city of residence seemed fairly natural.  I’m praying that it lasts.

Yakutsk is the capital of the Sakha Republic (pronounced ‘Sa-ha’ with a sort of throaty quality to the ‘h’, similar to how you’d pronounce the ‘ch’ in ‘Bach’), which is a part of the Russian Federation.

I’m still not sure what all of that means exactly, particularly as it relates to governance, but I imagine that I’ll understand it eventually.

Apparently, the Russian name for the Sakha Republic is Yakutia so the terms are used interchangeably.

The Sakha Republic is mostly populated by ethnic Sakha people.

There seems to be some disagreement between a very good guidebook that I was given and the opinion of one of my local colleagues about whether or not Yakutia is actually a part of the region that is traditionally called Siberia (the guide book says it is, she says it’s not), but I’m still trying to understand the nuances of all of that.

Yakutsk is a small city with only about three hundred thousand inhabitants.

That’s less than half the population of Kingston.

So far, I’ve seen nothing ornate or fancy here.

In fact, as of right now there’s nothing particularly beautiful about the city that I can see.

It’s been dusty so when it rains, as it has a couple of times in the past two weeks, it gets muddy.

However, I understand that when it’s covered in snow, it’s quite beautiful.

I’ll see if I agree with that opinion in a couple of months.

Also, I noticed that the vehicles around town are absolutely filthy; in Jamaica, someone would have finger-written “wash me” on every one of them by now.

When I asked about it, a local colleague said that the general attitude is: why bother washing it when the dust and mud will quickly make it dirty again?

What with my attitude to bed-making, I find it difficult to judge them.

I understand that the bus is the main mode of transport around the city.

Seeing as all of my immediate needs are met from nearby sources, I don’t anticipate that I’ll be using the bus very often.

However, I used one last week in the company of a local colleague so I’ve been indoctrinated.

A bus ride from any place in town to any other place in town is a flat rate of 25 rubles (about 42 US cents), which makes it the preferred mode of transport for most people.

I don’t yet understand what number buses go where but I’ll cross that bridge when I need to.

Taxis are also an option but they’re more expensive and I’ll definitely need to know some Russian in order to explain to the driver where I need to go.

I’m not ready for that yet so I’ll keep it simple for now and stick to the bus when I need it.

Meanwhile, summer is definitely over and the temperature has started to fall.

Don’t worry though; I’m properly and appropriately attired for the weather and as it gets colder, I’ll add more layers and heavier outer clothing.

The one thing I needed to buy here for sure was appropriate winter boots, but my brilliant local work colleagues outdid themselves again last Thursday.

I was just leaving school to go to the Chinese market to get said boots when they stopped me and told me to come try on two pairs that a couple of past teachers had left there.

They almost made me cry with their generosity because I would have had to spend at least 5,000 rubles to get appropriate boots that would last for one season; boots to last longer than one season are four or five times more expensive.

They also tried to give me a pair of snow pants but they were way too big so I left those for someone else to benefit from.

Besides, I brought waterproof, fleece-lined pants with me anyway.

On another note, on the drive in from the airport, which sits just outside of the city proper, we were cautioned not to drink the tap water, which happens to be yellow.

Yup, you read that right.

Apparently, water filtering isn’t very well done in Russia and although the water isn’t toxic, it isn’t healthy to drink it directly either.

You can’t easily tell that it’s light yellow but if you look for it, you can see it; for example, I see a light yellow stain in my bathroom sink.

Don’t worry, as I said, it’s not toxic and I use bottled water for drinking.

As for the people of Yakutsk, over the past two weeks, I’ve interacted with the merchants in the area around where I live and work, as well as a few other locals in the places I’ve visited on a few excursions.

Most people with whom I’ve come in contact have been pleasant enough but reserved.

Two girls who work in one of the mini-marts downstairs are very friendly and try to chat with me in English.

The man who runs the fruit and vegetable stall in the other mini-mart very generously gave me a free banana and orange when I bought an onion last week; it was totally unexpected and so very kind since I had already paid him and was walking away with my onion.

Most items are obvious (you can’t really mistake toilet paper) but some are a little more obscure; I could easily have bought sour cream as yogurt last week.

I’ll be taking Russian language classes, which should start within the next couple of weeks, so that will help me a lot in daily life.

I’m hoping that I’ll have a short learning curve for conversational Russian because I’m eager to start having sensible conversations with the people with whom I interact daily outside of the classroom.

I also want to be able to confidently get around on my own since all public signs here are strictly in Russian.

I’ve been walking around the city with various local work colleagues but I still haven’t quite gotten my bearings yet beyond my immediate neighborhood.

Up to now in my life, I’ve had a reasonably good sense of direction so hopefully, I’ll catch my bearings soon.

I’ve started recognizing a few landmarks and figure that I’m well on my way there.  Also, I have my map app to help.

So, what are my first impressions of my new city?

It’s simple, plain and fairly friendly; most days are sunny (despite the pictures below), and thus far I’m content.

I didn’t fall in love with it at first sight but I’ll see how I feel about it as time goes on. 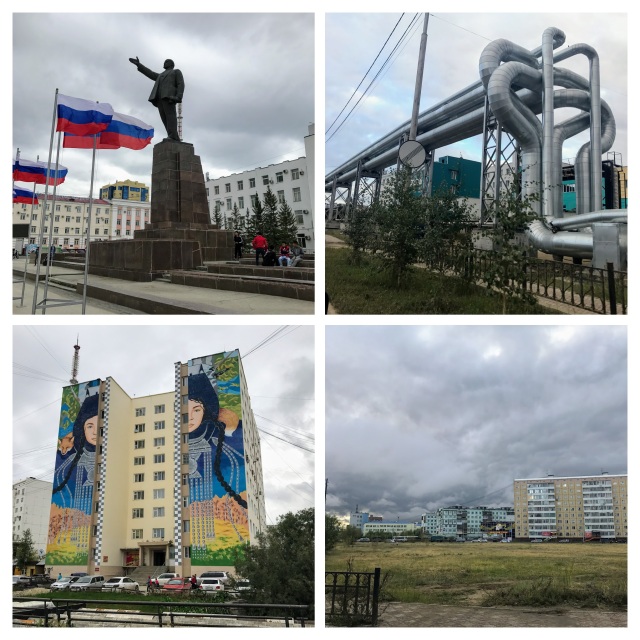 Pictures from around town clockwise from top left: the requisite statue of Lenin in the town, I hear there’s one in every city in Russia; utility pipes are above ground, otherwise the shifting due to permafrost would constantly damage them; an apartment building; another apartment building with painting of a traditional Yakutia girl