I know, you’re wondering about that word, right?  Don’t worry, I’ll get to it in a second.

So, I attended my first summer solstice festival at the end of June.  I’m not quite sure where to start in telling you about it.  I suppose the best place is the beginning.

I think that to most people in the world, ‘summer solstice‘ means nothing.  Close to one of the Earth’s poles, it means the longest day of the year, when the sun never truly sets. In Yakutia, it’s marked by a festival called “yhyakh.”  I’m still working on the pronunciation myself; just try to say it how it looks.

Yhyakh takes place over two days and happens at different times during the month of June in the towns and villages across the Republic of Yakutia.  In Yakutsk where I live, I think yhyakh is on the weekend closest to the actual summer solstice.  This year, it took place on June 23 and 24.  There’s a huge field just outside of the city that’s the designated yhyakh staging ground.  My understanding is that nothing else takes place there, and  I can see why.  It’s such a large event that permanent structures have been erected at the venue.  Some families bring their children, set up tents and camp out all day and night.

When my company started compiling the list of team members who would attend the festival, there wasn’t even a question about my participation.  In fact, it had been a foregone conclusion from several weeks before because I was performing there.  “Performing?  Performing what?” you ask.  I was playing the khomus!  Three times!  I know, right??  Our group of three khomus players (one khomus teacher and two students) played on different stages at the festival.  But, wait, I get ahead of myself.

We started learning to play in earnest back in March.  At that time, there was no talk or intention of performing anywhere; we just wanted to learn how to play.  After a few weeks of lessons, the idea of performing at yhyakh was introduced by our teacher, and she’s such a positive person with so much confidence in our budding skills that we agreed.

Of course, performing there meant getting decked out in traditional dress.  We went off to a dressmaker, bought fabric and accessories and within three or four weeks of deciding that we would participate in yhyakh, our dresses were made and our outfits were ready.  The only thing I was missing was the traditional boots.  I hadn’t seen a pair that I really liked and couldn’t bring myself to buy a pair that I thought was just kinda OK (I’m serious about shoe buying that way).  In the end, I wore a pair of ankle boots, which was perfectly acceptable since many young Sakha women these days wear stilettos with their traditional dress. 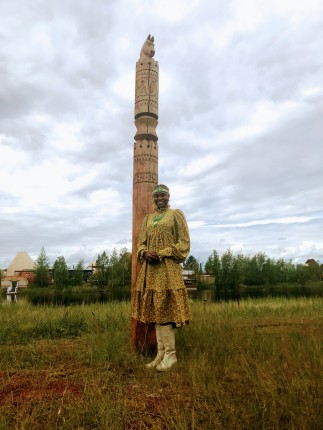 Me in traditional dress, including boots borrowed just for this photo

I will say that our traditional dress also wasn’t completely traditional, in that the dresses are usually ankle length, made of un-patterned material and have no body definition.  But we’re young and trendy so we didn’t even consider all of that.

Also, a major part of the costume is the jewellery.  As we’re in Yakutia, where people prize the silver that is mined here, the real traditional jewellery is beautifully ornate and made of solid silver.  That’s very expensive so there wasn’t even a question of buying the real traditional jewellery for yhyakh.  But, of course, there are great alternatives.  No, not fake silver.  Beads.  In fact, some alternative versions are even made of wood and some are made of horse hair.  The final part of the outfit is a small cross-body bag that you can put any small thing into.  I kept my khomus in mine.

Anyway, back to the business at hand.  We met at school early and took a hired bus to the field outside of town.  Luckily, we were ahead of most of the traffic so it didn’t take us too long to get there.  As we settled in at our base for the day (a semi-permanent tent on the outskirts of the event site), I marvelled at the peaceful atmosphere. 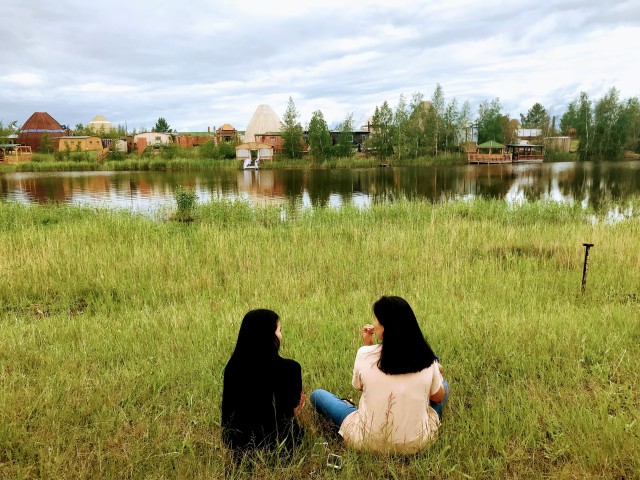 View from the location on the lake where our tent was pitched. Beautiful. Peaceful.

Headlines on the day of yhyakh.  I just couldn’t read the stories.

The peace struck me in particular because I couldn’t help but compare it to the daily news bulletin I had just pulled up in my email.  It told of mayhem all over the world.  I read the headlines and decided that I was more interested in my peaceful surroundings rather than all the craziness happening outside of it; I deleted the email.

I spent my first hour or so at yhyakh exploring the grounds a little bit with a couple of colleagues, and observing various rituals, including people asking for blessings at a holy tree.  I also found Masha!  I’m always so happy to see her.

After that it was time for the opening ceremony.  I had a pretty good vantage point sitting on the grass just at the perimeter.  I didn’t understand most of what was happening so I looked on as a dispassionate observer.  Yakut people are into shamanism so there were several shamans doing stuff with a fire.  There were also lots of children and teenagers dancing in formation and a few animals were lead through the proceedings.  It was all quite a spectacle.

Part of the opening ceremony

I spent the rest of the morning walking around a bit more.  As we walked around, I attracted some attention, as I reasonably expected.  I’m a Black women in a place where Black people are scarce, and I was fully decked out in traditional dress.  Many people stopped to ask for selfies with me throughout the entire day.

By early afternoon, our little group of khomus players had to find the first stage we were playing on, which was the mayor’s stage.  I know, right??  Scary!  But relax.  We weren’t playing for the mayor himself.  It was just one of several stages around the event ground, but still, it was a pretty major one and this was our first public performance.

After about an hour of waiting around for our turn, we finally ripped off the bandage and did our thing.  We did alright, the crowd smiled encouragingly at us, and the mayor’s people gave each of us a lovely gift.  Afterwards, we walked back to our base and quickly had some munchies, then we were off to our second performance at the Khomus Museum stage.  I was a little nervous about this one because it was the Khomus Museum!  But we did our best and were met with delight, again after waiting around for about an hour.  Local people understandably love to see foreigners embracing such an important part of their culture.

By the time we finished there and went back to our base, it was after 7 pm.  All of us from school were planning to have dinner together as a group but everything wasn’t quite ready yet so a few of us headed off again to the nearby track to watch horse races.  There, I saw Masha and Marat and their son, as well as one of my summer camp kids.  Meanwhile, the horse races were entertaining but it was the children playing accompanying music on drums and traditional instruments, including the khomus, that I really enjoyed.

Eventually, we returned to base again and had dinner, after which we did our last performance of the day for our colleagues.  Then we did an okhuohai dance in our tent.  This is a traditional Yakutian circle dance with an okhuohai caller (someone singing lyrics) and the other participants repeating the lyrics, with arms linked together and moving clockwise in a circle.  I participated in the dance.  Of course, I have no idea what was being said so I didn’t actually sing.  It was my first time participating in an okhuohai dance, although I’d seen it several times previously.

A couple of hours later, after walking around some more and buying myself an ice cream, it was time for the sun ceremony.  Yakut people believe on receiving energy and good luck from the power of the sun, so a very important part of yhyakh is the ceremony that welcomes the new sunrise.  Seeing as how we were still firmly in the middle of white nights and the sun hadn’t really set, sunrise was officially at around 2:30 am.  We went off to the designated field, where there were more rituals performed by the shamans and dancers.  It was a little cloudy that morning so by the time the ceremony was done and people were embracing the power of the sun it was about the same level of brightness.  This was followed by a gigantic okhuohai dance.  And suddenly, for us, yhyakh was over.  By 3:30 am we had packed up our stuff and were dispersing towards our various rides home. 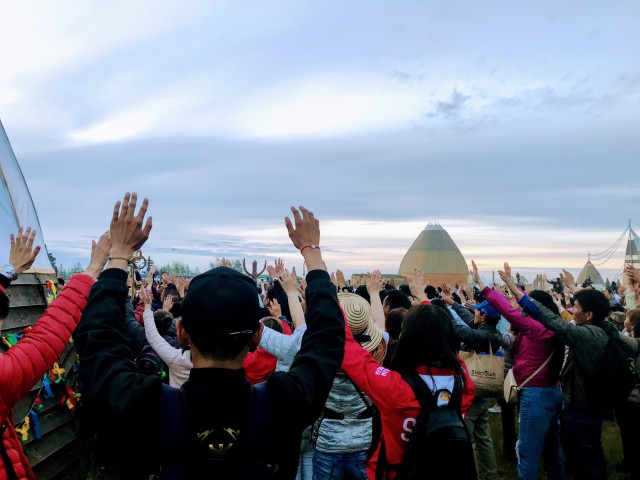 Afterwards, I found out that I had somehow made it onto social media at least twice with my participation in this very important local cultural event.

Is my local social media star on the rise?  I kid, but I truly was flattered.

Overall, I enjoyed my first yhyakh experience.  I really liked my dress, my beads and my bag; I had fun playing the khomus after the first nerves passed; and I enjoyed the spectacle of the various ceremonies that take place and are important to many of the people who have become important to me.  But the experience pushed me that much closer to God, appreciating my ability to worship the Creator and my dependence on Him as my source, instead of His created things.

They gave up the truth about God for a lie, and they worshiped God’s creation instead of God, who will be praised forever.  Amen.  Romans 1:25 (CEV)