A Walk In The Woods

On the day of writing this post, I’m working from a café.  As I’m writing, it’s a few minutes before 9 am on my day off and I’m already sitting in my chosen cafe, where I’ve just collected my latte and chocolate éclair.  Since I plan to spend the day here, I’ve secured a table towards the back beside a window so that I can watch the day wax and wane but still maintain a sense of focus and solitude as others come and go throughout the day. 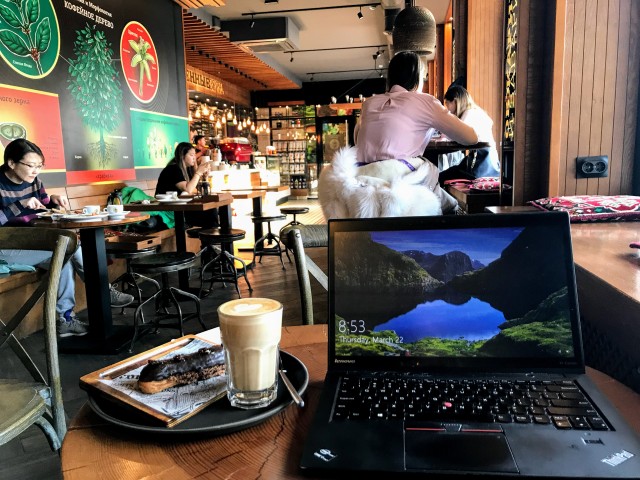 My work space for the day

As I listen to the American indie music that’s coming through the speakers (oddly enough, with the occasional worship song thrown into the mix – God is awesome, isn’t He?), waiting for the caffeine to hit my system and thinking about the things I want to accomplish in the next few hours, my mind is also wandering back to last Sunday.  It wasn’t exciting in the least but it was somehow still perfect.

Last Sunday morning at around 11 am, I joined a small group of other foreign teachers from school, along with a few of their local friends who aren’t affiliated with our school and set off for an hour-long drive out of the city to a village called Техтюр; that’s “Tekhtyur” in English.  Actually, we weren’t going to the village, but to the ski park just beside it, which is also called Tekhtyur.  Since it had warmed up significantly, with temperatures in the mid -20°C, one of the non-school local friends had decided to organise a snowboarding outing for the day.  So at the designated time, ten of us piled into a car and a twin cab pickup truck, which carried the snowboards and boots, and set off out of town.

I’ll just put it out there up front: I didn’t snowboard and I didn’t ski.  That’s because I wanted to spend the day mentally relaxed, not trying to keep from breaking my leg.  I’ve never snow boarded in my life and I skied once about sixteen years ago when I was in  grad school in northern California.  That time, I almost went off the side of a cliff back ways (don’t ask).  Balancing activities like skiing and snowboarding aren’t particularly fun for me because I’m physically awkward, and I’m OK with that.  I’m only into ice skating because I’m determined to experience the joy of gliding along a frozen lake.  Careening down a hillside, not so much.

“So why did you even bother to go to a ski park, then?” I hear you asking.  For the hiking.

You know that I rarely miss a chance for a good rambling walk and Tekhtyur did not disappoint.  As soon as we piled out of the car, I was itching for our walk to begin, especially because it was windy and my hands were a little chilly, even in my thickest gloves.  The rest of me, ski pants and all, was fine but my recent trip to Lena Pillars had taught me that all of me would be toasty warm as soon as I started walking.  Most of our party were planning to spend the day snowboarding and one person planned to spend the day relaxing in the café but three of us were keen to head into the woods.

After a few minutes of people organising themselves and our host securing a table for the barbecue he planned to do for lunch, the three of us set off on a path away from the slopes.  We walked for about an hour, getting further away from the noise generated by multitudes of people and further into the peace and quiet of nature.  Our vague intention was to circumnavigate the ski slopes, going from our starting point and circling the slopes to end up back where we started.

One of our small walking group is a Sakha man who hunts, so he was able to show us various animal tracks on the otherwise untouched snow: deer, rabbit, horse, and even one set of mouse tracks.  For a while, we walked along a track but eventually, we veered into the woods and the scenery became even more idyllic.  Fallen trees covered in snow, untouched snow on the ground, the clear blue sky above, fresh air – it all combined to give me a sort of quiet joy.

My walking companions on our ramble through the woods

After an hour of walking, we decided that we probably could go around the ski slopes but it would take us far longer than anticipated and our group back at the café would be firing up the barbecue soon.  We briefly contemplated going off the track we were walking along and forging our way through the almost knee-deep snow but we decided against that because, as much as it would give us buns of steel, it would undoubtedly also get tiring after a while.  We finally decided to turn around and go back the way we had come, after a brief snack eaten while standing around in the woods. 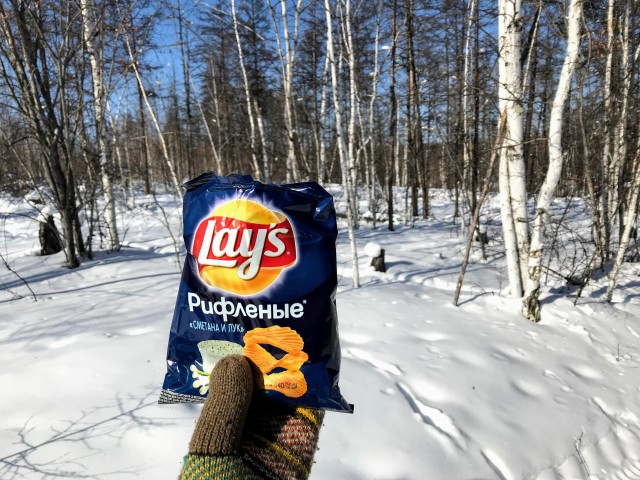 Back at the café, we spent about an hour hanging out with the rest of the group.  We had originally planned to eat outside but it was still windy and chilly so we congregated inside for the meal of flatbread and shashlik, which our host had barbecued outside.  It was my first time having shashlik and I’m fairly sure it won’t be my last.  Dessert was Turkish delights but I didn’t have any because I’ve had the real thing and I’m not particularly into substitutes.

By the time mid-afternoon rolled around, the snowboarders were heading back to the slopes and we hikers were heading off to explore a hill behind the café, at my suggestion.  The one person in our walking group who had previously been to Tekhtyur had never been up that hill so it was new ground for the three of us.  It was a bit of a hike and at one point we were tramping directly through knee-deep snow but in the end we were all happy we went.  Because this…

We could literally see the entire valley spread out below us, past the village of Tekhtyur to islands in the frozen Lena river beyond.

After I found a tree to kick (hey, I never pass up an opportunity)…

See the sapling in the back that’s covered in snow? Yeah, this is me on the way to kick it. Also, almost knee-deep snow!

…we spent a little time just standing around on a ridge, appreciating the beauty around us.  After a while, it was time to go back down the hill and rejoin our group.  I admit that I went with a somewhat sad heart because I feel pretty sure that this was my last romp in the snow for the rest of the cold season.  It’s disappearing fast and I think that by the next time I get a chance to go out of town, it will have largely disappeared. 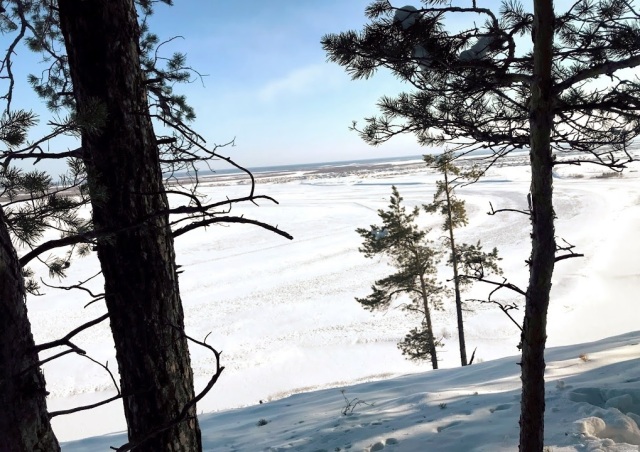 Back at the café, we piled back into the car and pickup and sped our way back to town, as much as one can speed on Yakutian roller coaster roads.  By just after 6 pm, I was back in my apartment, and by 6:30 pm I was out like a light.  I think all that fresh air and four hours of walking did me in.  It was the best sleep I had all week.

My day sounds like it was kind of boring and tame, right?  For me, last Sunday wasn’t about having fun on the slopes.  It was about revelling in the beauty of God’s creation and drawing joy from it, refilling my energy stores for the work ahead that He has for me to do.  There’s just something about being surrounded by nature that centres and recharges me.

Can I challenge you a little?  This week, if you can find a way, why don’t you go out into nature somewhere, be quiet and connect with God through His creation?  Even for just an hour, soak in the beauty of His work, marvel at the majesty of His dominion and find peace in the knowledge that the God of the universe is always ready and waiting for you.