Everyone Needs To Visit Lena Pillars & Here’s Why

Exactly two weeks ago today, the day after my birthday, I was sitting in the tea room having a quick bite between classes when I read a message that had come in earlier from Masha.

She wanted to know if I had plans for that Saturday because she and Marat were going to Lena Pillars and they were offering to take us.

You want to know about Lena Pillars.

Suffice it to say, it’s a World Heritage Site and, as a Game of Thrones fan who knows that I live beyond The Wall, seeing a natural rock formation that could be the actual wall from fiction has been on my to-do list.

Besides all that, Lena Pillars is a must-see for anyone who comes to Yakutia.

If you’ve gone to those places but haven’t done those things, then you haven’t experienced the best that it has to offer.

Anyway, I work on Saturdays so, with several crying emojis, I had to tell Masha that I couldn’t go.

Masha being Masha, though, found a way to make it happen.

She and Marat changed the day to Friday instead.  I hear you, how could Friday work if Saturday was out?

Well, February 23 is Defenders of the Fatherland Day in Russia and it’s a national holiday.

This year, it fell on a Friday so our school would be closed and I would be available to go with Masha and Marat to see the Pillars.

My text back to Masha screamed, “YES!!!”  Then I asked my two other colleagues who had previously been out with me in the company of Masha and Marat if they also wanted to go and they heartily agreed.

Our plans were made and I eagerly anticipated the day.

Our journey would take four hours by car and we would need to bring food to share since there are no restaurants nearby.

I decided to bring sandwiches and chips so I woke up early on Friday morning to make them.

M&M (see what I did there? Cute, right?) were picking us up around 9 am so there was no sleeping in for me that morning.  T

rue to their word, we set off from town just after 9 am, five of us all together in the car, chatting about all sorts of things.

Soon enough, we were out of town and in the countryside, Marat expertly handling the car over the roller coaster of a Yakutian road.

Seriously, guys, there are African massage roads and there are Yakutian roller coaster roads.

The roads weren’t so much bumpy as they were riddled with the occasional big dips that sort of came up out of nowhere and sent us all bouncing or flying with an, “Oooooohhhh!”

I suppose that’s to be expected when roads are built on permafrost.

We made a couple of stops within the first two hours, first at a shop to buy bread but it was closed, then in Marat’s grandma’s village at another shop where we did actually buy fresh bread (it was really good bread).

We also marvelled at the vast uninhabited land through which we were driving.  For kilometres, there was nothing but taiga on either side of the road, with small villages popping up here and there.

Within another hour of leaving Marat’s grandma’s village, we were driving onto the frozen river.  We continued on it for a whole hour.  ON THE FROZEN RIVER!!!

It’s called the winter road (Авто зимник – “avto zimnik”) and cuts travel distance between places in Yakutia during the winter.

We were literally driving on the Lena River – one of the longest rivers in the world, a river that flows into the Laptev Sea of the Arctic Ocean – for almost an hour.

We stopped, we took photos, I wrote my name in a snow bank… 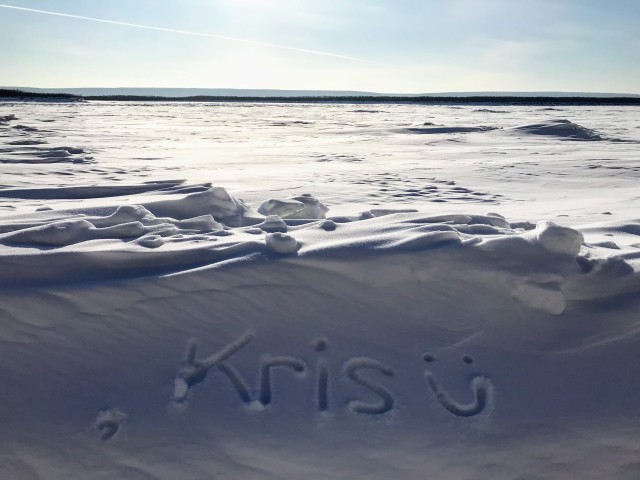 Wrote my name in a snow bank, with the snow-covered frozen river directly behind the snow bank

Then we got to a turnoff in the Winter Road and we veered left directly across the river to the other bank, where the pillars are located.

Did you get that?  In a couple of months, people will have to take boats across the river to get to the pillars but we just hung a left and drove across on the ice.

My butt has never been so cold while going to the bathroom.  And that’s all I’ll say about that.

Thermometer outside the inspectorate’s cabin

After we had all taken care of our business, we proceeded into the small cabin that serves as the inspectorate’s office, paid our fee to go up to the pillars, and set off.

It was about -40⁰C according to the thermometer outside the cabin, and it felt like it.  No joke, -40⁰C on a windy riverbank feels way different than -40⁰C in the city.

My feet were already cold in my unti and I was a little concerned about that but I prayed on it and decided not to worry.

Within minutes, we set off on the walk that would take us to the lookout point atop the pillars.

At first, it was like a lovely jaunt through the woods.  Then the climbing up steps began and it wasn’t such an easy jaunt anymore.

Soon enough, we were huffing and puffing our way up through the winter wonderland of the surrounding woods.  I can’t speak for anyone else, but under my coat, hat, scarf, sweater, undershirt, fleece tights and thigh high wool socks, I was sweating like a pig.

I had to push back my hood a few times just to give my head some fresh air.

But on the plus side, my feet were toasty warm from all the body heat that the climb was generating.  In any case, we persevered and finally made it to the top.  It was stunning.

Thickly snow-laden trees immediately behind me, with the frozen river and the taiga in the distance

My phone battery doesn’t do well at low temperatures so I didn’t get much in the way of my own photos but M&M were wise enough to bring along their nifty camera and they got lots of photos with it.

Marat had also brought a flask of tea for us all to share but I didn’t partake because I didn’t want to have to go to the coldest outdoor bathroom on earth again.

No, sir.  Plus, I had a cold that had come on the day before and I didn’t want to infect anyone by using a shared cup.

After wandering around at the top for a while, during which time I wished I could build a cabin up there to live in, forever wrapped up in the fairy tale winter beauty, it was time to start the trek back down.

By the time we returned to the base of the pillars, two and a half hours had passed from when we first set out.  This shocked me because the time had flown by so fast that it had seemed far less.

On the way back to the car, I picked up a pebble from the river, a memento of my visit, along with all the photos.

Back in the car, we warmed up as we ate from our collective provisions and discussed the experience.  My phone also warmed up and before we left, I hopped back out to take a few of my own pictures.

Part of the pillars behind me, and Masha in her pink jacket tromping through the snow on the river ice

Then it was time to start back.

Back across the river we drove, along the ice road, where we stopped to explore a shallow cave in the side of a hill.

Eventually, we got back onto the regular road and our journey continued with only a short petrol refilling stop.  All too soon, we were back in the city and being dropped off.

Panoramic view of part of the pillars

What a wonderful day I had!

I went the furthest into the Yakutian taiga that I’ve been to date, drove on a ginormous iced-over river, walked on said iced-over river, went for a hike up to a World Heritage Site, found joy in a winter wonderland and spent the day in the company of wonderful people.

And it was all thanks to M&M.

But they are kind and generous with their time and have a desire to share their country with us.  I thank God for allowing me to meet people like this here in this beautifully cold land that is truly made warm by the people who inhabit it.

The natives showed us a extraordinary kindness; for because of the rain that had set in and because of the cold, they kindled a fire and received us all.  Acts 28:2 (NASB)