So there I was, feeling pretty meh about my life, just coming on to the end of my existential crisis but still not feeling energised like I usually am.

Then along came my birthday and God used it to give me a gift.

Let me begin by saying that my birthday a week ago Sunday was AH-mazing.  I don’t tell a lie or exaggerate even a little bit when I say that it’s the best birthday I’ve ever had on my actual birthday because it combined several things that I love.

I’ll tell you what those things are in a bit.

About two weeks before, someone from work had suggested that we go to Chochur Muran.

This colleague and I happened to be in the tea room at the same time and we got to chatting about the things I’ve done since I’ve been here.

When she learned that I hadn’t yet been to Chochur Muran, she insisted that it was a must-do and set a date for two Sundays hence, because it would be a little bit warmer and because she would be available to go then.

The fact that it also happened to be my birthday was totally coincidental and a bonus, since I had no plans.

Once we agreed to make it a date, my colleague sent a message to our company’s group chat to let everyone know that we would be going, and a few others decided to join us.

In all, we were a group of eleven colleagues and two children.

So, what is Chochur Muran?

I knew nothing about it except what I could surmise from a few photos that my colleague showed me of her last trip there with friends.

Basically, it’s a hill on the edge of town that, from the photos she showed me, seemed to provide great views of the city.  That was all I knew and that was all I needed to know.

I figured that some time in nature was just what I needed and I was eager to get it.

On the Sunday morning of my birthday, I woke up and, for the first time in my life, I didn’t immediately remember that it was my birthday.

I really didn’t.  I thought first of my friend’s son, who shares my birthday, and I sent him my usual birthday wishes, then I remembered that it was my birthday too.

I know, it seems ridiculous, right?  Maybe it’s because I’m having trouble processing that I’m firmly over forty and some things in my life are definitely not as I thought they would be at this stage.

But that’s a different story for another day.

Our group had agreed to meet in the lobby of a hotel in the city centre, about a twenty-minute walk from my place, so I set out at 9:30 am to make our agreed 10 am meeting time.

I was the first to arrive but within a few minutes, most of us were there.

Some of us piled into our boss’ SUV and the rest of us caught a couple of taxis and our day was officially underway.

We arrived at the hill within thirty minutes and, after spending a couple of minutes organizing ourselves, we started making our way up the steps that form the first part of the climb. 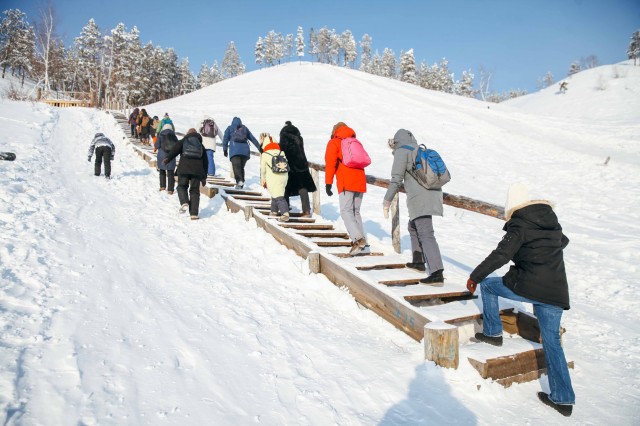 Off we go, at the start of our climb.  Which is me?

Less than five minutes later, we were at the first lookout point.

It was then that I realised that Chochur Muran isn’t a very big hill but it’s big enough to serve up wonder and beauty.  Even though we were only a few meters up, I could already see the promise of what was waiting for us further up.

I admit that I was a little winded by the time we got there less than ten minutes later (you try climbing steep steps for ten minutes straight with no break and see if you aren’t winded too) but I didn’t pay too much attention to that. 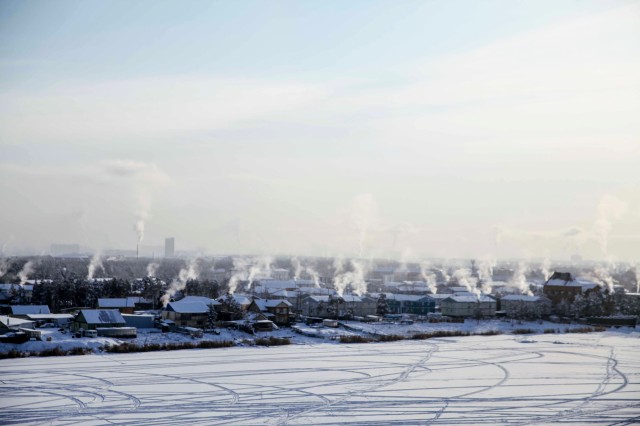 Dachas on the edge of town, by a frozen lake 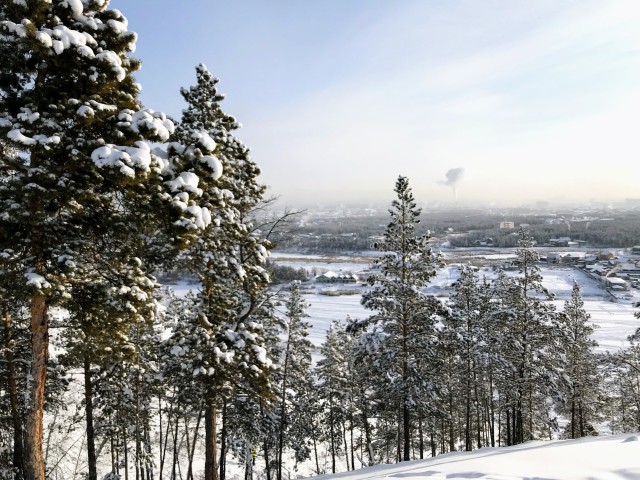 Pristine snow all around us

This was when I truly started to feel happy again for the first time in over a week.

I think there’s a particular mixture of joy and peace that I feel when I’m out in nature – and especially up a hill or mountain – that I don’t feel anywhere else.

Nothing else has yet given me that exact same feeling.

Some of that was what I felt as I stood and looked down at the frozen lake and the smoke rising from chimneys across the city.

It was as if my soul exhaled on a long sigh, releasing a breath I didn’t know I’d been holding.

We played in the snow, we had a snack of mini blini that our boss had brought along, and we took a tonne of photos while everyone marvelled over my frozen eyelashes, especially since I was the only one sporting them.

That was mainly because of how my scarf was wrapped, I learned, so that the steam from my breath condensed on my eyelashes and immediately froze.

Also, my lashes are the longest natural lashes here so there are more of them to become frozen.  Asian women know what I’m talking about.  Enough said. 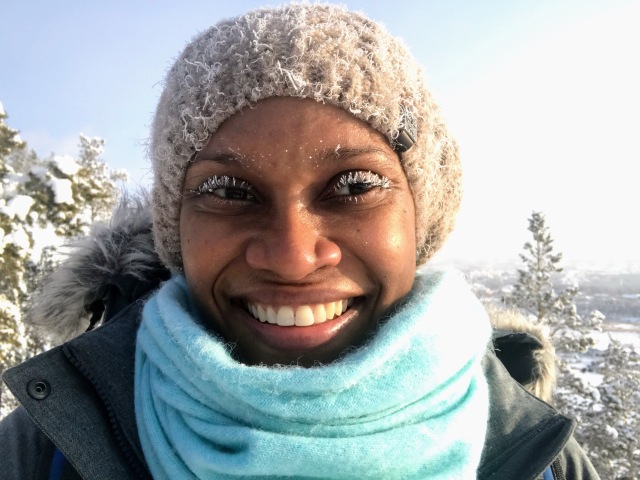 We continued our hike up to the top of the hill.

This was another ten or fifteen minutes of walking but there were no steps this time, only a trail through the snow.

Once we got there, I marvelled over the stunning view, realising that I could see beyond the city to the start of the taiga. 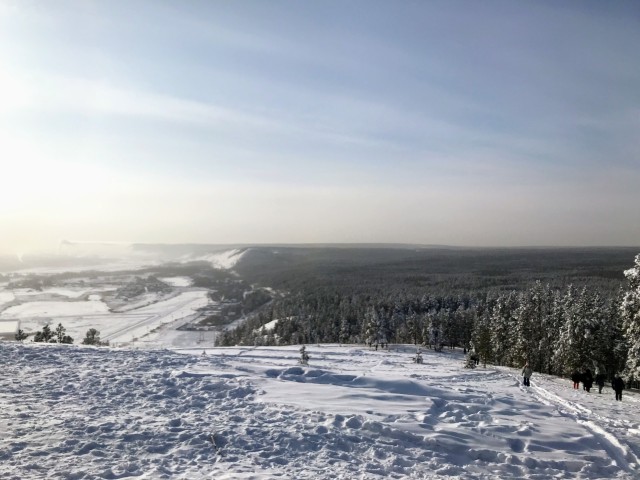 The start of the taiga, as far as the eye can see

After a few minutes of grateful awe, I pulled out my flask of hot water that I had brought and threw it into the air, where it instantly froze and fell to the ground as snow.

That is such a cool thing that I cannot even explain to you how brilliant it is.

It was my second time doing it in as many weeks but I don’t think it will ever get old.  When next you find yourself in sub-zero temperatures, DO IT! 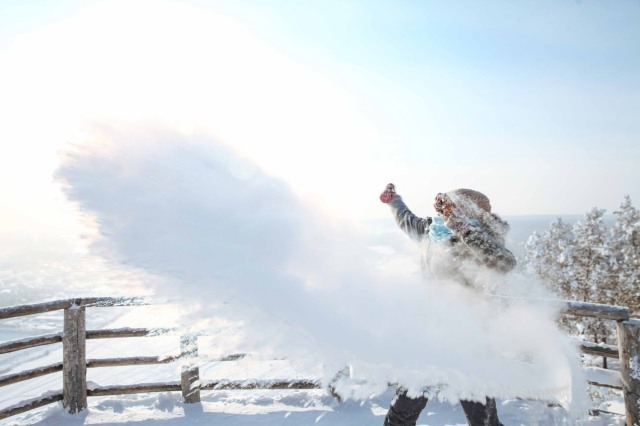 While others threw their own hot tea into the air, I found three trees to kick – two I co-kicked with one of my colleagues and one of the kids, and one I kicked all by myself – and all too soon it was time to head back down the hill.

At the bottom, one of my colleagues and her son were sledding down the hill on old plastic bags and I decided to give it a try.  So screaming the entire way, I did.

A little girl, who wasn’t associated with our group, decided that she wanted me to try sledding properly using her sled so she had her mom insist that I borrow her sled and give it a try.

So screaming some more the entire way, I did.  Sledding is the bomb, guys.  You also need to get on that right away.

The final part of our day was lunch at the nearby traditional restaurant, where a table had been reserved for our large group.

From the bottom of the hill, we walked across the frozen lake to the restaurant, stopping on the way to slide down an ice slide then to feed two horses in a pen (they weren’t Yakutian horses but they were BIG).

I don’t know when I became so intrepid and gung ho to try all these different things – sledding, sliding, feeding strange horses – but life has become much more interesting since I did.

Finally at the restaurant, we defrosted from our icy morning out.

We ordered our food and drinks; I had wine and young horse cooked in its own juices, which is exactly how it was described on the menu.

Then we walked around the restaurant, part of which is a museum housing old mammoth bones and other treasures. 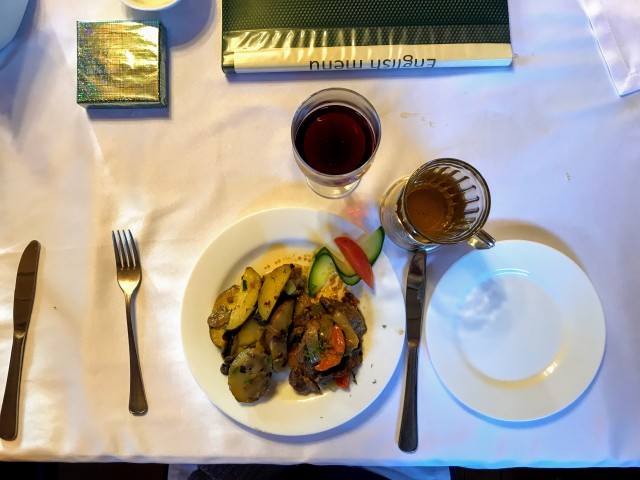 Young horse with a side of potatoes…yum!

Back at our table while we waited for our food to arrive, my colleagues did the unexpected.

They started presenting me with gifts and giving speeches. I didn’t expect any of it.

Sure, it’s the norm for any team member having a birthday to be presented with a gift purchased from donations by the other team members but I had expected that to happen the next day at work.

And I expected just the one communal gift.  I received so much more than that.  I went home with five gifts and a handmade card from one of the kids. 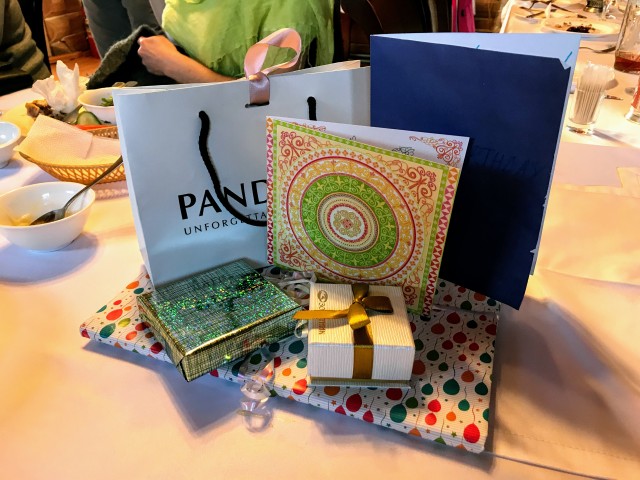 I only expected flowers, or something small, not all this!

The gifts were so thoughtful and the words of love that they shared were so precious to me.  You know I cried, right?  Multiple times.  I felt overwhelmed by their kindness and touched by their generosity.

This was when I knew that God was in this day.

I felt that He was showing me that, yes, I’m not unique in that someone else could do my job.  But if I conduct myself with excellence and with love, as I have been trying (and admittedly failing sometimes) to do, then I will have succeeded at blooming where He’s planted me.

I started out by saying that this birthday was the best I’ve ever had on my actual birthday because it combined things that I love.

So what are those things?

They are: nature, a hill, a hike, cold weather, snow, stunning views, trying new things and an excellent meal.  But best and most important of all was the wonderful company I spent those hours with, who made the day happen and did so much to make me feel special, even though the original intent of the day had nothing at all to do with celebrating my birthday.

By the time I got back home in the mid-afternoon, there was literally nothing else I could have asked for.

I had started the day with zero expectations, especially based on my history with birthdays, and in some ways those expectations were met.

But God used my colleagues and newfound friends here to give me a birthday present that trumps anything I could have thought up on my own; He gave me back my sense of purpose and vision and those are priceless gifts that outweigh everything else.

But I have spared you for a purpose – to show you my power and to spread my fame throughout the earth.  Exodus 9:16 (NLT)