The second week of my holidays was far more social than my first week.  I was out and about meeting people every day.

On the second of January, I joined four other teachers from school for an archery lesson.

One of the teachers has a student who does archery and somehow they got to talking about it and the next thing we knew, she was asking in the holiday activities WhatsApp group if any of us would be interested in having a lesson.

Well, of course, I wanted in on that.

We met in the mid afternoon, five of us teachers and two of their children.

We spent the first thirty minutes of our hour-long lesson being briefed on safety instructions and essential archery etiquette, doing warm-ups (we had to stretch our arms and upper backs) and learning the basic technique of how to shoot an arrow from a bow.

After that, we got kitted out with a breast protector, arm protector, quiver and three arrows each.

The next fifteen minutes were spent taking our first shots using training bows, with no bullseye pinned to the target board.  T

hen they put up the bullseyes, gave each of us our own bow with scopes and we got to shoot at the target a total of six times, in groups of three shots each time.

Actually, no, don’t call me Katniss. Only one of my shots landed in the middle yellow section of the target; two landed in the blue section and one in the white section.

One of my arrows went directly into the wall beside the target and the other bounced off the target and landed on the floor.  Pretty sure Katniss did way better even on her first try.

Whatever, it was a wonderful experience and we plan to go back some time.

On the third of January, I ventured out of town with Masha and Marat again and the same foreign teacher who had organised us for archery.

This time, we went into the woods.  They picked me up just after 10 am then we went and collected the other person, who made the fourth in our party.

By 10:40 am we were out of town.  The first thing we saw was a herd of Yakutian horses grazing by the side of the road. 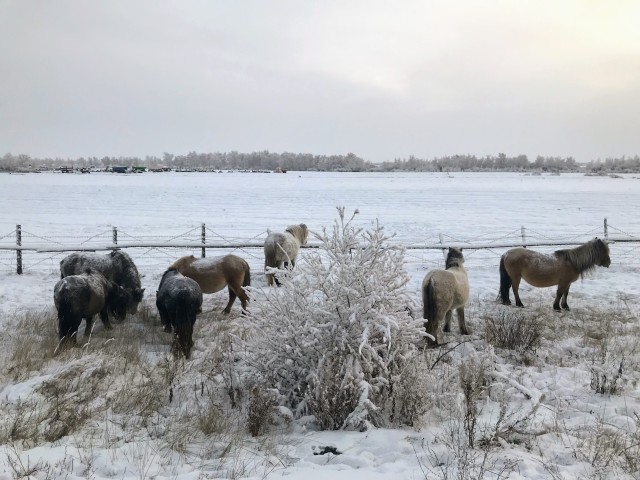 Fluffy Yakutian horses, some of which looked pregnant

We continued on to the town of Kangalass, about thirty minutes’ drive from Yakutsk.

We drove into the woods above the town and surveyed the frozen Lena River below us.  It had been snowing for the previous few days so everything was covered in fresh, white powder.

Guys, it was absolutely gorgeous.  We went for a walk in the woods and I kicked a tree.

Standing on the ice road across the river, with a receding van in the background

We spent another lovely afternoon at Masha and Marat’s kitchen table, eating a wholesome, home cooked meal, going to town on stroganina (frozen raw fish; I really liked it this time), and three of us (Marat, the other foreign teacher and me; Masha abstained) knocking back vodka shots.

Marat says that Russian vodka is harsh so he brought out his very good, very smooth French vodka and we each had three shots in between bites of stroganina.

No worries; it was such excellent quality vodka that my three shots only warmed my chest and didn’t affect me in any other way.

By 3:30 pm we were on our way back to the city and I counted this another wonderful day out with this lovely couple.

On the fourth of January, I spent an hour or so at a coffee shop doing some stuff online that I needed to use my laptop for (still no wifi at home), and also meeting with the same foreign teacher of the previous two days, who I had promised to help with a school project in a couple of weeks.

Afterwards, we proceeded to one of the bridge group’s flat for a New Year’s bridge brunch.

There ended up being only four of us but we spent a pleasant six hours munching on various cheeses (including a delicious blue cheese), meats, crackers, fruits and sweet treats and drinking more delicious Georgian wine (seriously, where has this wine been all my life??).

At around 6 pm, we called it a day and dispersed to our own homes, where I cuddled up with Hallmark and a book for the rest of the evening.

Anyway, skating is so popular here that brand new skates are cheap, so I got them for less than the equivalent of US$40.

After my bit of shopping, I spent the evening with my New Year’s party host at her house watching her favourite singer in concert.

On the sixth of January, we had band practice again because on the day before we got a gig for the night of the seventh, which was Christmas night.

I also spent some time helping that other foreign teacher with her project for school again.  I got home in the middle of the afternoon and spent the rest of the evening writing, editing, reading and watching another movie.

On the seventh of January, I spent the entire day at home relaxing, reading, watching another movie and trying to get my nerves under control.

Our gig didn’t begin until about 9 pm so I left home at 8 pm and met the band at the venue.  We had invited our colleagues from school to come along (performing for a familiar crowd is surely less stressful than performing for one hundred percent total strangers) and a few did.

We did our gig, sounding better than we had the last time, so our rehearsals paid off.  The most important thing is that we had a lot of fun jamming together.

We also have another guitarist not pictured here

On the eighth of January, I wrapped up my holiday as I had started it – with hibernation.

The most effort that I made that day was wash and twist my hair, because the next day I was back at school first thing in the morning.

My Christmas break wasn’t the stuff of great travelogues because it wasn’t brimming over with exciting adventures but it was satisfying nonetheless because it was exactly what I needed, even though I didn’t know it beforehand: lots of rest, just the right amount of socialising and a few new experiences.

I’ll save the adventures for summer.