I remember when I lived in Northern California for about a year and a half.  When it got cold during the winter, normal people would don their coats and scarves, but there would always be that one guy riding the bus or train or walking around town wearing a t-shirt and shorts like it was the middle of summer.  I used to assume that these people must have come from some state that experienced harsh winters, like Illinois or Minnesota.

In the intervening decade and a half that have passed since then whenever I’ve been in cold environments, without fail there will be someone who appears to be inappropriately under dressed for the weather and acting like what they’re wearing is totally fine.  Up to this past January when I was in New York for my eye surgery, a lady wearing nothing but a regular business suit strolled up to the bus stop to wait with me and everyone else for the bus.  Except for her, we were all properly bundled up against the biting wind and the winter temperatures.  I admit that these people fascinate me because I usually get the feeling that they’re trying to use their deliberate lack of weather-appropriate attire to convey their belief that they’re cooler than the rest of us.

Nobody acts like that in Yakutsk.  Nobody.  These people don’t play when it comes to cold weather.  Everybody began bundling up as soon as the weather started changing, with no apologies and no trying to act cute.

The day that I arrived in Yakutsk was warm and balmy.  I wore a long-sleeved t-shirt and stretchy pants all day, which is standard travelling attire for me.  The next day, the warmth was gone and there was a chill in the air.  Autumn literally arrived overnight.  Everybody, including me, wore sweatshirts or fleeces or light jackets for the next two weeks, as well as rain jackets on those days when it drizzled.  Then the temperature went down again and everybody pulled out their down parkas and wool coats.  The kids started wearing hats, scarves and boots.  We had a day or two of warmth in the middle of the falling temperatures but people still wore their parkas and heavier jackets on those days, just in case.  Nobody here pretends like it’s not cold.

I remember the day they turned on the heat on in the city.  It was the Friday morning of the Day of Yakutsk celebrations.  I was in the teachers’ room at school prepping for the demo lessons that I would deliver the next day when I heard a sound like running water coming from the heater.  Another international teacher and I simultaneously looked at the heater then at each other then shrugged and went back to our work.  When a local teacher entered the room, I asked her what the sound was since it was still going and she said, “It’s the water in the pipes.”  Being unfamiliar with gas heating systems, I replied that the sound was coming from the heater and wondered if she was sure it was water.  She reiterated that it was water and explained no further.  I decided to be satisfied with her answer until I could find someone who could explain it to me better.

A group of us were going out to dinner that night, so when I finished my work, I went home to relax and change, and I heard the same running water sound in the pipes around the heaters in my kitchen and bedroom.  So later at dinner I asked again and someone was finally able to explain it to me simply.  First of all, the entire city is heated by a gas-water heating system, which is why I heard the water in the heating pipes.  As I understand it, the gas heats the water in the pipes that are connected to the radiator, or heater, which in turn warms the room.

Secondly, everything is centrally heated.  That means when the gas is turned on for one in the building (and possibly in the city – I’m not sure just how central “central” really is), it’s turned on for all.  Apparently, once the temperature drops to a certain level, the guy in charge of flipping the switch to start the gas flowing to heaters in homes and businesses gets to work.  This also means that nobody adjusts the heat in their individual home or business.  In fact, there are no manual controls on the radiators for this.  It’s central heating all the way.  So if we feel hot when we’re inside, we open a window –every single one of which is double-paned – to cool down the room.

See? No controls on the radiator.

I continued to hear the water running in the heating pipes for a few days, then we had that brief few days of warmth and they turned the gas off.  For the past couple of weeks, it’s been on again.

One last thing to report.  When it started raining in late August, our maintenance lady at school put a large box of plastic shoe covers on the bench that’s inside the entry door.  The box has been there ever since in a silent command to don a pair before going further into the building.  At first I thought it was a pain to put them on but the poor woman already spends all day wiping and re-wiping the floors; imagine if most entrants to the building didn’t use the shoe covers.  I don’t use them on most days since the walk from my place to school takes me almost completely via the sidewalk and therefore my shoes don’t get dirty.  But I do use them if it’s damp outside and for sure once it starts snowing I’ll use them all the time. 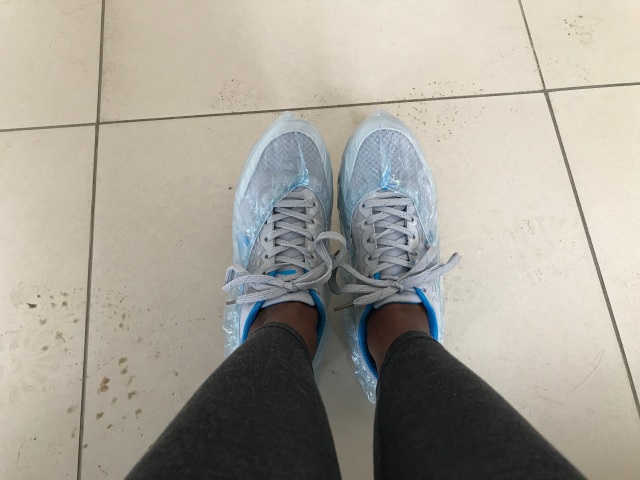 Winter should be here any week now and then we’ll all bundle up in our hats and gloves and scarves and really heavy coats and ski pants and boots.  I have two pairs of boots that I thankfully inherited from a previous teacher.  A local colleague told me to take both since, she assures me, one of them is good for the autumn and spring temperatures down to -25 degrees Celsius, while the other is good for winter temperatures as low as -50 degrees Celsius. 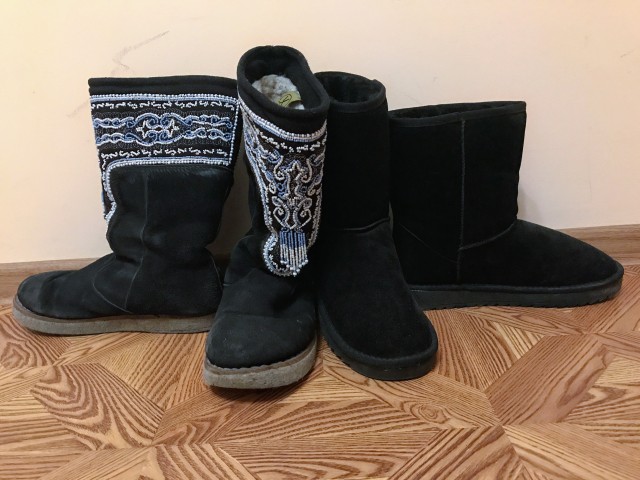