Auntie drove from New York to New Jersey then to Pennsylvania and Maryland and into Virginia.  I took over at a Burger King in Virginia then drove across the rest of the state and on to West Virginia, South Carolina, North Carolina and back into Georgia.  Yes, people, I was back at JEXIT Stop 3!  Christmas and the new year was spent in Atlanta.

Mostly, my time there was very quiet this time around.  Unlike just a couple of weeks before when I was out and about every day, this unplanned return visit was a slow down for me, and that wasn’t necessarily a bad thing at all.  People came over and we visited people, but I spent most of my time in Atlanta just hanging around and getting some essential work done.

I couldn’t NOT try on a veil

My Christmas day was quiet; other than church, I spent it binge watching the Hallmark channel so it was pretty darn perfect.  I think Boxing Day was actually my favourite day this go around in Atlanta.  I spent it wedding dress shopping with my aunt’s friend, a lovely lady who has known me all my life but who I haven’t seen in more years than I can remember.  I particularly enjoyed that outing because it was my first time engaging in this time-honoured tradition.  In other words, I’d never been wedding dress shopping before in my life!  I enjoyed it immensely – the dress makes the bride, after all – so I was really thankful for the privilege of being included in this very important event.

I spent most of the rest of the week between Christmas and the new year pretty quietly – reading, working, writing, and hanging out with my aunt.  But then I had a girls’ night sleepover at Auntie’s friend’s house, leading into new year’s eve, just me and her.  That time was precious to me.  The last time we were together years ago, we were still adult and teenager.  This time around, we were two adult women relating to each other as two Christ-centered adult women do.  There was girl talk and catching up but there was serious talk too, woman to woman.  That growth and change in our relationship felt very good to me.

So it was that on new year’s eve, I got my first pedicure since January as part of girls’ night/day… 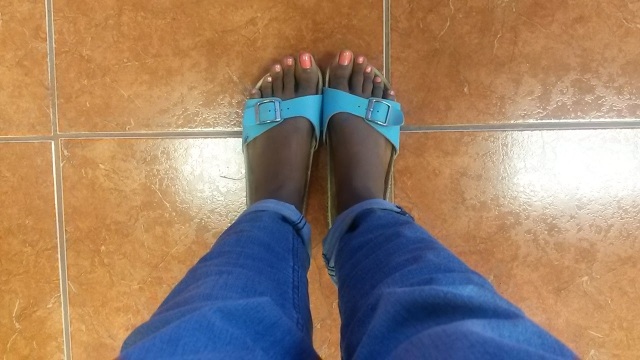 Not my slippers, hence the toes hanging over…both of my big toenails have grown back in

…and went to my first car wash ever!  I mean, a real car wash where the car rides through the bay while big machines wash it.  I’m not even gonna act like I didn’t turn into a complete dork when I found out that I could sit in the car while it went through.  Yes, I totally did and my day was made.  I made a video of my ride through the car wash but my phone ate it.  Bummer.  Sorry. 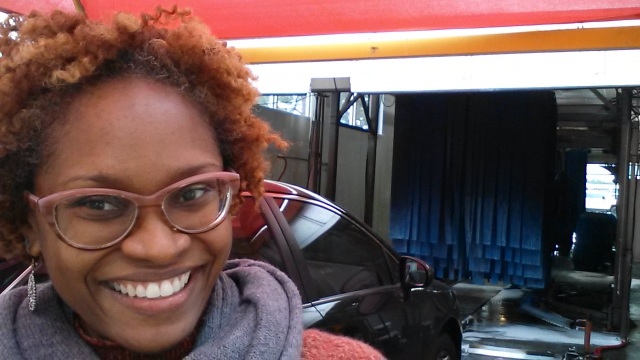 About to go through the car wash

On new year’s eve, my friend and I also saw a movie together, did some errands and spent some quality time in her kitchen (calm down, I helped make sorrel, I didn’t cook anything) before we said goodbye.  I rang in the new year with Auntie then promptly went to bed and awoke again at around 8 am on new year’s day.

That afternoon, it was time to leave JEXIT Stop 3 in my dust again and head back to New York.  I had to be at the airport there in less than 36 hours so we didn’t tarry.  At 2:30 pm we started our journey back, driving across Georgia, South Carolina, North Carolina, Virginia Washington, D.C., Maryland, Delaware, New Jersey and into New York.  Auntie and I shared the driving as we did on the journey down just over a week before, with her doing most of it this time around.  We got stuck in traffic at one point in the afternoon, which delayed us by about 2 hours.

As we drove across the those states along dark stretches of highway, just us, God and a few other intrepid drivers, the night felt really long.  Rain and mist were our constant companions the entire way from Georgia to New York, making it difficult to see the markings on the road sometimes.  I took over the driving at about 4 am and Auntie dozed on and off as I drove, as I had done while she was driving.  I had to stop for (McDonald’s!  Aaaarrrrgggghhh!  The horror!) coffee at one point because I was praying myself awake.  That weak coffee took an hour to kick in then the effects only lasted for about an hour.  At one point, I prayed for the sky to start lightening so that I could at least look at things along the highway as we drove, to perhaps pique my interest and help me stay alert.  That didn’t happen until about 7:30 am.  As we cut through the dark, I listened to talk programmes on the radio to try to help keep my brain awake, and thankfully found enough to help with that since by the time I started driving, we were mostly out of the boonies and could pick up radio that I wanted to hear.

We finally pulled up in Auntie’s driveway at around 8:15 am, almost eighteen hours after we left Atlanta.  I’ve never unloaded a car so fast.  Within 20 minutes, after a quick use of the bathroom and brush of my teeth, I was lying in bed getting ready to go to sleep.  Unfortunately, I only slept for about 3 hours, but my body was done sleeping so I got up.

I passed the afternoon visiting with a friend, shifting some things around in my luggage and checking in online.  At 10 pm, Auntie dropped me off at the airport for my last flight of these 12 months.

JEXIT had come to an end and it was time to return to Jamaica.