Almost the minute I got back to Jakarta from Bandung, I started wondering where to go on my next days off.  Although I had just been away for 3 days, those were September’s days off that I hadn’t taken and I still had October’s days off pending.  A friend of The Jamaican suggested that I check out Cirebon (pronounced “Chi-reh-bon”).  I asked him why and he said, “Batik.”  That was good enough for me.  On top of that, when I mentioned to the local volunteer with whom I spent that Sunday afternoon that I was thinking of going to Cirebon, her response was, “Oh ya, you will get batik.  Cheap.”

By that time, JEXIT plans were pretty much set.  I knew exactly when I was leaving Indonesia and the places I would be stopping on my way back to Jamaica.  So I now knew who I needed to bring gifts for.  Batik, being the national pride of Indonesia, is the perfect gift.  Batik at rock bottom prices is even better.  I decided to take the last weekend of October off and travel to Cirebon.

Cirebon is a small city on the north coast of Java, about 3 hours away from Jakarta by train.  Based on my research, its top sightseeing offerings include a cave, a temple and a mosque.  I had no interest in seeing any of those things.  In fact, all I wanted to do was get out of the city, buy batik, relax and write.  The lovely local volunteer offered to put me in touch with her husband’s family who live in Cirebon so that I could stay with them.  I seriously thought about accepting (saying yes to those new experiences) but in the end, I declined for the simple reason that I wanted to be alone, with no obligation to anyone.  I spend 6 days each week surrounded by people.  I wanted to spend my 3 days off by myself, recharging for the weeks ahead.  She understood and recommended the best place for me to buy batik in Cirebon.

My days off would begin on Friday so on Tuesday I booked my kereta api (train) ticket, paid for at Indomaret as usual, and made my hotel reservation and arrangements to be picked up from the train station.  Then I slogged through the rest of the week, putting things in place to cover the work that needed to be done while I was away. 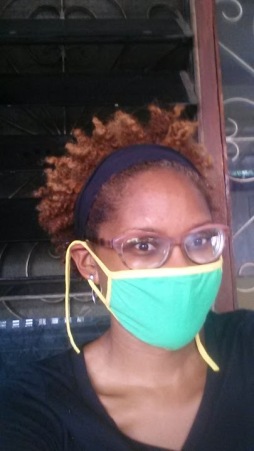 About to get on my Go-Jek…the inside of the mask is black – Jamaican flag mask!

On Friday morning, although I would normally take a cab to the train station, I ordered up a Go-Jek instead for 2 reasons.  First, my train left at 10 am which meant that I would need to leave the centre by 8:15 am, which meant that a car would get stuck in the awful Jakarta traffic.  If that wasn’t reason enough, I felt like I had been spending far too much money on cabs shuttling back and forth to Jakarta Pusat during my brief social butterfly phase a few days before.  What I would spend on a bike to Stasiun Gambir would be about a third of what I would spend on a taxi.

Unfortunately, my Go-Jek rider that morning didn’t seem to know where Stasiun Gambir was so we took a little longer than we should have.  But after stopping 3 times to ask different people for directions, he finally managed to deliver me to the station at around 8:45 am, after about 40 minutes of driving around.  I paid and thanked him, got my boarding pass printed and hung out in Starbucks for 45 minutes, sipping mint citrus tea and Whatsapping my peeps.  At around 9:15 am, I made my way to the train platform, where the train was already waiting.  I boarded, found my very comfortable seat, and settled in for the ride, feeling the usual joy for the journey bubbling up inside of me.  Impressively, we departed Gambir right on time, headed non-stop for Cirebon.

Again, as I had 2 weeks before, I watched the city go by outside the train window.  I saw the gleaming high rises in the background and shacks and garbage in the foreground.  After about 45 minutes, we seemed to have exited Jakarta.  The views out the window on the way to Cirebon weren’t as beautiful as the view to Bandung had been; there were no mountains and waterfalls to ooh and aah over.  It was mostly flatlands of rice fields.  And I think the smog of Jakarta extended quite a way because the green of the rice fields didn’t seem as sharp as I think they should have been.  Of course, it could have been because of the dirty train window so I’m willing to stand corrected on that assumption.

At about 12:45 pm, the train pulled into Stasiun Cirebon and I alighted with my ever-present backpack.  My hotel shuttle driver was waiting for me and we drove the 15 minutes to the hotel, where I was quickly checked in.  The king-sized bed in my room was absolutely delightful, as were the cloud-soft, sweet-smelling pillows.  My room was clean and comfortable and I wanted for nothing.  I grabbed 1 of the usual bottles of complimentary water and headed out.  There was a mall an easy walk away and I wanted to see a movie.

About 15 minutes later, I was buying my movie ticket.  I killed an hour getting a late lunch at the food court then headed back to the theatre to see the movie.  As I walked past the concession stand and saw hot dogs for sale, I determined that as soon as I get back to the west, I’m having a bratwurst dog, smothered in onions, relish, spicy mustard, mayonnaise and ketchup.  Yum.

The movie was blech (Jack Reacher: Never Go Back…it should have been called Jack Reacher: Never Go See) and when I stepped out of the mall into the early evening, it was raining.  It had clearly been pouring while I was comfortably ensconced in the theatre; now it wasn’t raining hard but it was still more than a drizzle.  I waited to see if it would ease up but after a few minutes it didn’t so I went back inside, bought a (bright yellow!) umbrella and made my way back to my hotel.  One hot shower later and I was snugly wrapped up in bed reading.  By 6:30 pm I was out like a light.

My first day away in Cirebon had 3 of my favourite things – a train ride, an action movie and rain.  It hadn’t been exciting by anyone’s standards but it was perfectly perfect for me.