A Taste of the Nightlife

A couple of Saturdays ago, I got my first real taste of the Jakarta night life, and I have to say, it was pretty delicious.

A woman who used to be a local volunteer here invited me out to have drinks and see a live band.  Of course, seeing as how I’m all about new experiences right now, I said yes, I’d love to go.  Also, she’s a really nice person and she had asked me out a couple of times before but I had to decline because I had other plans.  I was excited to go, not because I’m the queen of the night, but because I was looking forward to seeing a little bit of what Jakarta night life is like.

I knew almost 2 weeks in advance that we would be going out and, seeing as how I had abandoned my one “dressy” dress that I had brought with me to Indonesia, I literally had nothing to wear.  So on the Sunday before our night out, I spent the day at the mall looking for something to wear (I was looking for something else too, but more on that in a few days).  As always, H&M came through for me and I found a cute black shift dress with faint white geometric patterns that I could pair with my black tights and aqua sandals (also from H&M but I brought those from Jamaica).  Voilà!  Saturday night outfit, check.

She told me that the show would start at 10 pm so I promised to be ready by 9 pm.  Since I know how absolutely worthless I am when it comes to keeping my eyes open when I go out late at night, I doubled my usual coffee intake that day – I wanted to minimise the chances of me yawning and nodding off halfway through the night.  Happily, I succeeded in achieving that goal.

On Saturday night, about 30 minutes before she was due to pick me up, it started pouring rain.  Surprisingly for a Jamaican, I didn’t at all consider cancelling – Jamaicans are notoriously unable to perform normal activities, such as working, going to school or having a night out, once the rain starts to fall (it’s a proven fact that that’s the wickedest time, so we don’t want to do anything except snuggle down in bed at home).  She showed up for me at 9:30 pm with her brother in tow (a trusted dude to keep an eye out for us is always good for single ladies to have on a night out) and we were off.  It took us about 45 minutes to get to the bar but we chatted and caught up with each other the whole way.

We went to a bar in an area of the city called Kemang; apparently, it’s where all the Westerners hang out.  We arrived a little after 10 pm but the show hadn’t yet started (Indonesian 10 pm is actually about 10:30 pm) so we ordered drinks and settled onto stools at the bar, from which we had a great view of the stage. 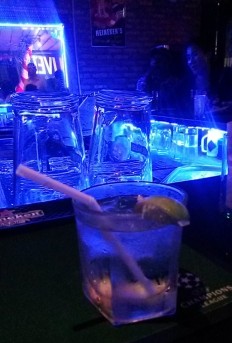 Now, about those drinks…I HAD VODKA!!! In Indonesia!!  I thought alcohol was illegal here but apparently, that’s only in Aceh.  There isn’t a huge variety of it available but it’s here in Jakarta and Wikipedia tells me that it’s totally legal.  So as we sidled up to the bar, I thought about what I wanted to drink.  I didn’t  feel like having wine and as I perused the drinks menu, I didn’t see any mixed drink that I wanted, so I improvised.  I had the bartender make me an improvised Smirnoff Ice by mixing vodka and Sprite.  It was delicious, not because the bartender was so great at mixing drinks, but because it was the first real drink I’d had in months (not counting that glass of wine I had in Siem Reap).  I nursed that 1 drink all night.

We didn’t have to wait long for the band to take the stage.  I had expected to be mildly entertained but I’m not gonna lie, they had me at the first note.  They started off with 1 of my favourite songs from the early 2000s – Coldplay’s In My Place.  Uh…yes, please!!!  The lead singer had one of those raw, rough voices that draws you in and makes you think he went through everything he’s singing about.  And he sang with his whole body; there was such an energy about him and all the other members of the band that I couldn’t help but be drawn in.  They totally killed it through the next few songs then they absolutely blew my mind; they performed Bob Marley’s Could You Be Loved.  Say whaaaaaaaaaattt???  I couldn’t believe it when I heard those first distinctive guitar chords.  No, seriously, I jumped off my barstool and starting hooting and hollering because who would have expected this?  The rest of the bar went just as crazy as me.  They followed up this sing with Sweat, aka A La La La La Long, by Inner Circle.  Now, by this time I was thinking, “No, man, dem bwoy yah bad!”  That was it for the reggae portion of the night, but I was highly satisfied, seeing as I didn’t even expect to hear a song that I knew, much less music from my homeland. 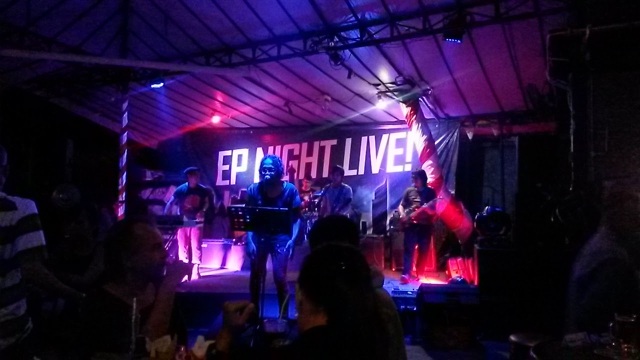 The band…I have no idea what they’re called and neither did my crew, but they were great!

When we had just arrived, the bar was about half full but by this time, the place was crawling with people.  It wasn’t wall-to-wall people like it would be at a Jamaican live show, but there were a lot of people there.  Including some drunken idiots.  They actually took a little bit of the shine off the night for me.

They were a group of white guys all wearing the same polo shirt and plaid skirt.  Yup, you heard me, skirt. I assumed that there were part of a club of some kind and that was their “uniform”.  And the drunker the got, the more offensive they became.  I saw more men’s underwear and lily-white legs than I ever wanted to see in public, because they kept lifting each other’s skirts or tucking them up in their underwear.  Then they basically took over the stage.  The band took requests and the drunk brigade requested more and more heavy metal music that just sounded like ear-splitting noise to me.  Eventually, it got so that they were up on the stage singing and the band’s lead singer was doing back up.  We finally got sick of them and left at 1 am, when they because too boorish and offensive to tolerate anymore.  It had stopped raining so I was back at the centre by about 1:30 am and fast asleep by 2 am.

Even despite the drunken idiots, I had a really fun time.  I danced, I sang, I listened to great music, I had a drink, I hung out with nice people.  I absolutely enjoyed my first taste of the Jakarta night life and I’ll certainly take another bite, with the right company.