In my opinion, a good thing about travelling is that it shows up my vulnerabilities.  I’ve discovered a few since in my recent solo journeys, not the least of which is my eyes.

I’ve worn glasses since I was 9 years old.  I remember how much I wanted them, mainly because my sister already wore them (covetousness is a heck of a thing).  I did all I could to make my eyes bad enough that I had to get glasses, including sitting 2 inches from the TV.  Now, I can’t say for sure that my success in obtaining glasses was totally due to my dedicated efforts, seeing as my father has suffered from nearsightedness for decades and my sister didn’t actually try to get glasses; her eyes were bad enough that she had to get them.  However, I’m sure it contributed.

Ten years into my stint as a glasses-wearer, I got myself contact lenses.  I was 19 years old and had worked and saved enough money at my temp job selling World Cup qualifying match football tickets to get my first set.  For the next 11 years or so, I wore my contacts at least 5 days each week and on dressy occasions, until my eyes suddenly rebelled about 10 years ago and I started having allergic reactions to my contacts.  Then I was back to glasses almost 100% of the time.  Up to when I was packing up to move to Indonesia, I would occasionally wear my contacts but only for a couple of hours at a time, and only in the name of fashion.  I didn’t bring my contact lenses with me to Indonesia because I didn’t imagine I would need to.  I’m glad a didn’t – the conditions in which I live don’t encourage me to stick my fingers into my eyes on a regular, or even irregular, basis. 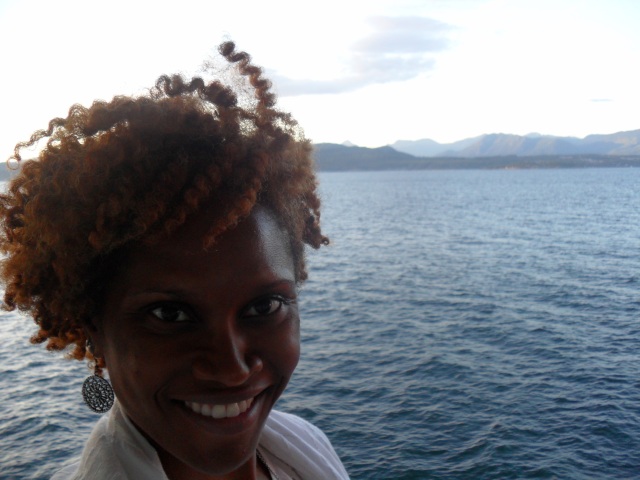 Last summer, in Alaska…I tore the contacts out of my watering, irritated eyes about an hour after this picture was taken

“How bad can it be?” you ask.  I literally cannot see without my glasses.  Heck, I can’t hear that well without my glasses – glasses wearers understand where I’m coming from.  It’s bad enough that I once asked my ophthalmologist if I’m considered legally blind.  He hemmed and hawed and never gave me a straight answer.

For 31 years I’ve worn glasses and have only ever seen them a fashion statement; in fact, my current glasses are the most boring I’ve ever owned, and that’s because I put someone else’s opinion ahead of my own.  Suddenly, though, I’ve stopped seeing my nearsightedness as just a part of who I am and have started seeing it as a liability instead.  The first time I felt this way was when that roach tried to climb my leg.  I wasn’t wearing my glasses at the time, seeing as how I was washing my hair.  Had my vision been anywhere near good, I would have seen the roach coming and avoided being physically attacked and emotionally scarred by it.

My visual vulnerability has been reinforced many times since then, especially on day 3 descending Mt. Rinjani when my glasses kept fogging up and I couldn’t see where to step half the time.  That will be a problem again in the future when I go up another mountain and encounter unfavourable weather conditions.

From time to time when I’m on a Go-Jek, the thought crosses my mind that if I’m thrown from the bike for some reason and my glasses fly off, I won’t be able to see anything.  Of course, this could happen in Jamaica if I happen to be in a car accident, but there’s something about being in a place that’s not home that makes me feel more insecure at the thought of this kind of situation.  It’s irrational but there you have it.

Not only does my extremely poor eyesight make me vulnerable, it also limits my activities.  For example, I didn’t go snorkeling when I was in Sabang back in March because it’s impossible to wear glasses and snorkel at the same time.  Remember, I literally cannot see anything but blurs when I’m not wearing them.  I mean, I’ve been snorkeling before but that was when I could still wear contacts so it wasn’t a problem.  Now, not so much.  This limits my pool and beach activities as well.  To be fair, though, last summer I went simulated sky-diving with my friend and her nephews in Toronto and I put on the mandatory goggles over my glasses.  But still!  Very uncomfortable.  (The sky-diving was fun though – wouldn’t do it for real but the simulated one is aces!  I highly recommend it.)

Even with all this vulnerability, the 1 thing I’m not worried about is misplacing my glasses since I have to wear them at all times, unless I’m showering or sleeping.  And even when I’m sleeping, I know exactly where they are.  I never have to wake up and grope around for my glasses because I always know where I put them.

In the context of my other weaknesses, my bad eyesight may not seem like a big deal.  But I’m a solo traveler, and being physically vulnerable while travelling is not a good idea.  I’m not afraid, but I like to think that I’m also not stupid.  Because, you see, the thing about having my vulnerabilities revealed is that it forces me to confront them.  With this particular one, I cover myself in prayer as I go.  When I get a chance, I’ll see if I can implement a permanent solution.