In Indonesia, the entire week of the end of Ramadan and the celebration of Idul Fitri (known the world over as Eid al-Fitr, or the festival of the breaking of the fast) is a holiday.  The entire week!  Did you hear me?  The whole country is on official, government-mandated holidays for an entire work week.  I’m liking this.

On the one hand, I still had to work.  This organisation doesn’t close, ever, except on Sundays, when we all have the day off.  So there was online work to be done, as well as 1 or 2 minor centre-related matters to handle.  On the other hand, we all looked forward to a slow week, since the next week would be extremely busy with the new school term starting and our students expected to flood the centre again.

About 2 weeks before the week of the end of Ramadan and Idul Fitri, I was sitting at my laptop working when I got a Whatsapp message from The Jamaican.  He was travelling for the week of Idul Fitri and wanted to know if I could house- and dog-sit for him, since his original plans for this had fallen through.  Wanting to check in with God and think on it for a minute, I told him I’d come back to him in a couple of hours.  Meanwhile, in my head I danced a jig.  I thought about it and couldn’t see a downside; I prayed on it and didn’t feel the Holy Spirit telling me no.  So after a couple of hours, I told him I would do it.

This would mean a few things.  First and foremost, I’d be doing him a favour this time instead of the other way around.  There would be no obligations on my part, I would owe him nothing.  Doing this for him would take effort – I would need to Go-Jek back and forth between his house (where I would hang out with the dog and sleep) and the centre (where I needed to be at work) every day.  Secondly, I would be caring for his dog, which meant feeding him (cooking his food –  I don’t cook dog food, people!  Too much turning of cornmeal in my childhood for dog food), walking him, and keeping him company.  Again, doing him a favour.  Finally, I would be doing some minor house-care; I had to throw some chemicals into the pool twice for the time I was there, and turn the pool pump on every morning and off every night.

Aside from the effort it would take, it also meant that I would be using a clean, mostly roach-free bathroom, sleeping in air conditioning, and getting to eat toast (he has a toaster!) for a grand total of 9 nights and 9 mornings.  I would spend less than US$25 on Go-Jeks back and forth for the duration, which would be my only extra expense.  I couldn’t wait to get started.

Now, people, I have never house-sat or dog-sat before.  I don’t think people do that in Jamaica, actually.  Jamaicans (who live in Jamaica) who have dogs that need to be cared for while they are away usually leave them at a boarding facility, which is usually also a vet practice.  I’ve done this myself when I had a dog (he lived outside, as most Jamaican dogs do).  In fact, some Jamaicans probably leave their dogs to fend for themselves until they get back from their travels.  No, generally speaking, dogs are not highly valued pets in Jamaica.  Jamaicans also usually set their home alarm systems, let their alarm company know that they are travelling, and go; they don’t get friends and relatives to house-sit.

You see why this was all totally new to me.  However, I’ve watched American movies with shenanigans that ensue while house-sitting and I was excited to do something new.  The Jamaican told me that since the dog likes company, if I was OK with it he would appreciate me allowing the dog to sleep in the room with me.  Another first.  I was fine with it.  I wanted the whole experience.

The week turned out to be pretty quiet, mainly because it is a quiet neighbourhood, but also because most of Jakarta’s residents had pulang kampung (gone home to their villages) for the holiday week.

For the first day or 2, the dog was really sad and I felt so bad for him.  He was missing his master and would walk around the house crying and searching for him.  Then I took him for a 2-hour walk around the neighbourhood – actually, he took me – and he seemed to accept me as his caregiver and settled into the situation.  He was still sad but not quite as pitiful. 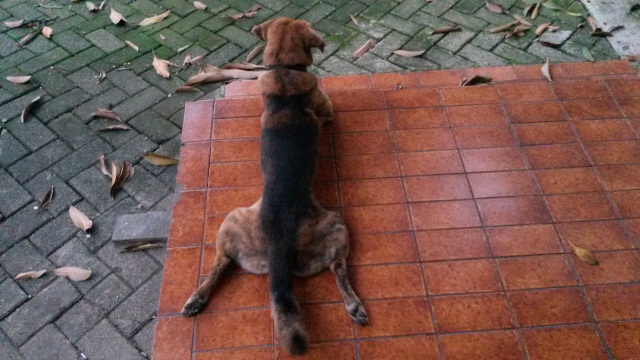 The dog, looking for his master’s return…so sad

Turns out, this dog is kind of timid.  For a couple of days, 2 strays took over his yard and front porch and he kept looking at me to get rid of them.  He actually wouldn’t even stay outside if they were out there; he’d jet back inside.  Also, he’s afraid of thunder and rain – even a drizzle.  He won’t eat at all when it’s raining and cowers in whatever corner he feels is safest until he’s sure it’s over (I found him behind the toilet in the bathroom during 1 episode – it was sad).  This meant that on evenings when it was raining, I would get up at 11:30 pm when the rain was over and feed him because I felt so sorry for him, knowing he hadn’t eaten for hours out of sheer terror.

On the last night of Ramadan, which is the start of Idul Fitri, there were celebrations going on all over the city.  As is done all over the world at Christmas and New Year’s, there were firecrackers and other types of noisy banger-type things going off.  The dog thought it was thunder and wouldn’t eat all evening and night.  He woke up and paced the room 3 times and each of those times I got up and tried to get him to eat but he still wouldn’t.  I knew I’d need my coffee more than ever the next morning.

With 2 more nights to go in this gig, what am I getting out of this?  Well, besides the clean bathroom, AC and toast.  I get to read lying in an actual comfortable couch.  I didn’t even think of that before I agreed to help.  This might sound like nothing much but I’ve been living at a place where there is literally nowhere to relax except on the floor or on a hard bench.  That leaves my bed for all relaxing and reading, which is fine but can be uncomfortable after a while when you’re reading on an iPad.

But most importantly, I’ve learned something about myself.  Remember how I told you that I’m an introvert?  Well, on at least half of the days while I’ve been babysitting the dog I’ve had to force myself out of the house to go to the centre so that I have human contact.  I could have easily stayed ensconced in the house all week and that is not a good thing.  Over the past few months of solo travel, I’ve recognised the importance of social interaction in ways I never appreciated before.  As much as I like being on my own, I now appreciate that it is through interaction with people that I get a lot of my mental stimulation.  Whether it’s discussing American politics or movies or brainstorming solutions to a work situation, it takes effort for me to want to engage socially but I do enjoy it once I get started.  And, as with every situation in life, God does have something to say about this in Proverbs 18:1 (GNT):

A man who isolates himself seeks his own desire; He rages against all wise judgment.

I’m seeing that the consequence of isolating myself is a high possibility of me doing stupid stuff because I’ll become (even more) selfish and reject wisdom.  I’ll have to keep an eye on this in the future when I’m tempted to seek solitude for more time than is prudent.

So, the dog and I have passed a quiet week and I I learned a valuable lesson.  Plus, I had some really good toast.  Wins all around.