Bali.  It’s Indonesia’s most recognisable tourist destination and attracts millions of visitors every year.  Just the name alone sounds exotic, doesn’t it?  It isn’t really, not by the correct definition of the word.  But, my gosh, is it beautiful!

Bali is in a different time zone from Jakarta – it is actually 1 hour ahead – so although our flight was only about 2 hours long and we had left Jakarta after 8 am (so far I haven’t been on an Indonesian flight that leaves on time but they still arrive on time…mostly), it was about 11 am local time when we caught a cab at the airport in Bali, headed for our hotel.

We were very happy with our hotel.  It was small, tucked away, had a gorgeous pool, the rooms were clean, attractive and air conditioned, there was a proper shower and…yup, you guessed it…a western toilet!  Bliss already!  I mean, come on, everything else is gravy.

Before leaving Jakarta, we had resolved that we were going to eat every nutritious meal that we could find in Bali – our bodies were crying out for it – so A had researched all of the best eateries in Seminyak (the area where we were staying) for healthy food.  Also, as a serious coffee connoisseur (read: snob), Jakarta Timur (East Jakarta, where we live) was severely disappointing for A, who had to drink 7-Eleven coffee with me (it’s not that bad – it’s from fresh ground beans!  But what do I know?  Before she started training me, I thought instant coffee was the bomb.).  So she also had several coffee shops that we needed to try out so that she could make up for all her caffeine fixes that she hadn’t been getting in Jakarta.  So our goals for Bali were: 1) go to the “must see” places; 2) eat all the healthy food we could find; and 3) drink tonnes of great coffee.

See?  I hadn’t shown that much skin in months!

Bali is a majority Hindu island, with over 80% of its inhabitants practicing that religion.  That means they are more liberal in their dress than other parts of Indonesia, and they are also more liberal in what they will tolerate clothing-wise from tourists, especially since they are also a huge tourist destination (Australians galore).  So we blissfully changed into our bathing suits with cover ups (we planned to find a beach) and hit the streets just after noon.  I wore loose pants and a tank top – seriously, my upper arms and chest needed the sun; they hadn’t seen the light of day since January.  How wonderful it felt to walk down the street like it was normal to have my arms , shoulders and upper chest exposed.

We spent that day strolling around Seminyak village, admiring the cute boutiques (my American friend would love them), A trying to pet every stray dog that we saw on the street, especially 1 called Billy (these crazy Americans), taking pictures of everything we saw, eating every fresh salad we could get our hands on (yum!) and trying out a new coffee shop.  We found a beach but the tide was so low and the water was so rough that we basically just ran around ankle-deep in the water for a few minutes.

The next morning, after a healthy breakfast of fruits and eggs (omelet for me, poached eggs for A), our tour driver Endrah picked us up at 8:30 am and we got started on our tours.  This was when I began to see the beauty of Bali.  On this full-day tour, we stopped first at Tanah Lot, where a group of schoolgirls nicely asked us to take pictures with them, a persistent and annoying vendor followed us around trying to sell me some postcards (I didn’t buy – one does not reward annoying behaviour), and we saw the dramatic scene of a temple on a cliff.  It was truly gorgeous.  I freely admit that I laughed hysterically at a group of female Chinese tourists who played chicken with the sea and lost in hilarious fashion – soaked from head to feet when a huge wave crashed over them, clothes turned see-through, dresses up around their waists, the full hundred.  I would have been sorry for them if they hadn’t been so obnoxious before it happened.  Even the guy who was taking pictures for them was roaring with laughter. 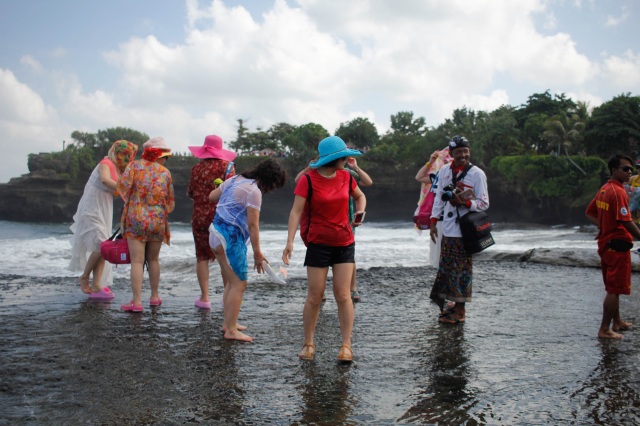 Anyway, we continued our tour with lunch overlooking Kintamani Volcano, an active volcano that last erupted in 2000.  It was a stunning view and we thoroughly enjoyed it.  Then we did an underwhelming luwak coffee tour – this is coffee that comes from Bali and it’s special because it’s from mongoose (luwak) poop.  Yes, the mongooses (mongeese?) apparently eat only the best coffee berries then the coffee people collect the animals’ poop and get the coffee beans from it.  We tried several teas and coffees before moving on to our next stop, Garuda Wisnu, where we caught the performance of a 5-minute excerpt from the Ramayana, a Hindu epic poem that the Balinese have put to dance.

Then it was off to Uluwatu to see the temple there and a kecak (pronounced keh-chak, meaning “fire”) dance, which also depicted a part of the Ramayana.  The dance is done against the backdrop of the setting sun, with an “orchestra” of male voices, about 45 of them.  It’s really an enjoyable and very well done performance, even in that relatively small setting.  The only downside was the annoying tourists who kept leaving before the 30 or 45-minute long show was over – so disrespectful to the performers and distracting to the rest of the audience.

To wrap up the night, we had a seaside dinner. When I say seaside, I mean that our table was on the sand, feet away from the water.  The ambience was beautiful and the food was delicious! We were each given a plate with a lobster, prawns, crab, mussels and fish (I had only a bite of my fish.  Why have boring fish when there was so much other good stuff?) and rice.  We were a total mess after we were done battling the crabs (so hard to break open!) but it was a deliciously filling meal. 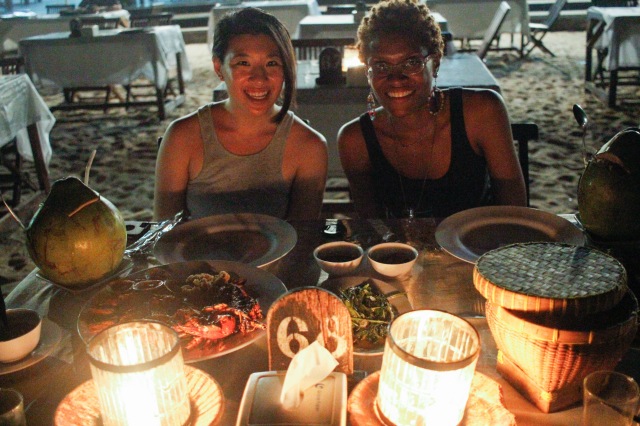 We got back to our hotel near to 10 pm, showered, relaxed and went to sleep feeling wonderfully tired.  So far, we were accomplishing all of our Bali goals and our first 2 days had been blissful.