A Day at the Mall

A and I spent our first day off in Jakarta at the mall.  It was so ridiculously sublime that I’m going to write about it.  Yes, I’m writing about hanging out at the mall like I’m 14 years old.  It was just that good.  What’s even better?  The entire blissful day cost us about 250,000 rupiah each, including transportation money.  That’s less than US$20.

We left the house at about 8:45 am, caught a cab and hightailed it to an area about a mile from the mall, which was our final intended target.  This area had promised a plethora of coffee shops for A to check out; she has been  to try to find a decent cup since we got to Jakarta without success, poor thing.  We failed to find the promised coffee shops but we still grabbed donuts and coffee (tea for me) at a local chain before deciding to head off to the mall.  It was about a 30 minute walk and we sweated all the way but it was so worth it. 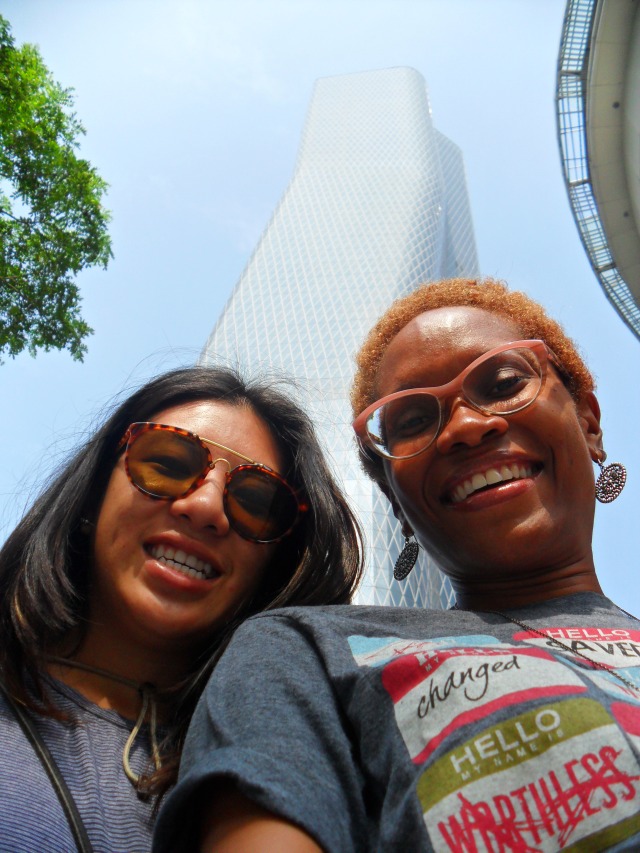 We got there at around 10:30 am.  The first thing we did was head to the bathroom, where I almost wept for joy to see Western toilets.  Don’t judge me – many malls in this country have squat toilets, as does the centre in Jakarta, but my knees do not like squat toilets so, yes, I am very happy when I see a real western toilet that flushes and everything.

After enjoying the really nice bathroom a little too much, we decided to explore the mall…all 5 or 6 floors.  That took us a while, but we found a cute home store, where we sat on sofas and lay on a mattress or 2 while the salespeople lurked nearby, no doubt trying to find a polite way to tell us to get off their wares.  But we needed something to dream about that night when we were sleeping on the uncomfortable bunk beds back at the centre, so we ignored them and continued testing mattresses – but only by pressing down on them with our hands, so they wouldn’t stroke out.

Then we decided that we could not pass up the opportunity to see a movie.  Movie theatre!  We bought tickets for an early afternoon showing of The Jungle Book and went to eat lunch at about 1 pm, when I had my first real ramen; apparently, it’s a real Japanese food, not the pre-packaged noodles of the same name that we’re used to in the west.

After lunch, we walked around some more then watched the movie (it was great!) then watched a concert that was going on in 1 of the mall’s atria.  The lady was singing her heart out but not 1 person in the very large crowd was even tapping their foot.  This was strange to me, since an unmoving crowd at a musical event in Jamaica is definitely not a good sign.  Not so in Indonesia.  The people were apparently having a good time, they just showed it with light, polite applause.  Absolutely no hooting and hollering.

Then we moved to another atrium of the mall, where we watched a televised kiddie dance competition (the hip hop group was the bomb – when are little kids dancing hip hop not cute?) while eating dip cones from Dairy Queen.  I’m not gonna lie – I busted a move cause the music was slammin’, but only a small one and very quickly because I didn’t want to get arrested for public indecency or something on my day off.  A and I agreed that the kiddie show was way more fun than the singing lady from the other atrium and that the ice cream was the smoothest we’ve had since coming to Indonesia.

We wrapped up the afternoon with some relaxation on a semi-comfortable couch at a coffee shop in the mall, followed by a farewell visit to the bathroom, which was still as beautiful as when we first saw it 7 hours before.  We left the mall at about 5:30 pm and caught a cab back to the centre.  Just before we got there, we picked up 2 sop buah for a light dinner and our fun day was over.

I didn’t learn anything from hanging out at the mall.  Nothing deep happened.  God didn’t change my life with a new revelation.  I don’t have any new pearls of wisdom to impart.

I simply had fun while enjoying a relaxing day spent mindlessly wandering around a really nice building with top notch facilities that are not a part of the rest of my week.

Now, what to do next day off?