OK, let me rewind and catch you up.

When I entered Indonesia at the end of January, I did so using a visa that allowed me to stay in the country for 60 days.  The plan was that when those 60 days were near to finished, I was supposed to be able to go to my local Imigrasi office with some simple paperwork and get an extension for 30 days.  I was supposed to be able to do that 4 times, thereby staying in the country for 6 months before having to leave altogether.  At that time, I would visit the Indonesian Consulate in either Singapore or Penang and get a new 60-day visa then return to Indonesia and repeat the 4-time visa extension cycle.  That would have taken me up to the end of my 1 year in Indonesia.

Along came the Acehnese Imigrasi, who decided that they would not be extending any of our visas until we got all of the organisation’s paperwork in order as they decreed it.  This left me with no option but to go on a visa run to Penang at the end of March.  I hear you asking, “Well, why not just go to another Indonesian city to get your extension?”  For 2 reasons.  Firstly, Penang is actually closer to Banda Aceh than the other Indonesian cities I could have gone to for a visa extension (Jakarta or Medan).  And secondly, it’s easier to get a new Indonesian visa in Penang – drop off passport and paperwork this morning, pick up passport with new visa tomorrow morning – than it is to get a visa extension in Indonesia.  Go figure.

I wasn’t complaining.  I would get a chance to be in the lap of (relative) luxury for 3 nights.  What was there to complain about?

I packed.  Not only did I pack my small roll-aboard suitcase for Penang, I also packed up my entire room, just in case the Imigrasi decided to kick in the door and evict us while I was in Penang; then A would only have my big suitcase and my Korean Dreamy pillow to grab.  This turned out to be a wise decision.  More on that in my next post.

I was in Penang by early afternoon on Easter Sunday.  I almost cried with happiness when the taxi dropped me off in front of my hotel; it was shiny and sparkly and beautiful to these eyes that had not seen shiny or sparkly or beautiful in 2 whole months.  My room was nice and I had 4 pillows – hooray!!  And there was a gym.  With equipment!  And I had an actual Western toilet that flushed!  Ahhh, the good life.

I dropped my stuff in my room and headed out to explore.  I wandered down Lebuh Penang and found a Subway restaurant just off the main road, where I gobbled up a Subway Melt with barbecue chips – a sandwich never tasted so good in my life.  Then I continued with my wander, buying postcards from a street vendor along the way.  I got all the way down to Prangin Mall before turning around and trying to find St. Francis Xavier Church.  I wanted to attend 6 pm Easter mass there because it was near to my hotel but the receptionist at my hotel had steered me wrong and by the time I got correct directions, I was already 15 minutes late, hot and sweaty and still a 20 minute walk away from the church.  So I headed back to my hotel.  Missing that service was my only disappointment during my 3 days in Penang. 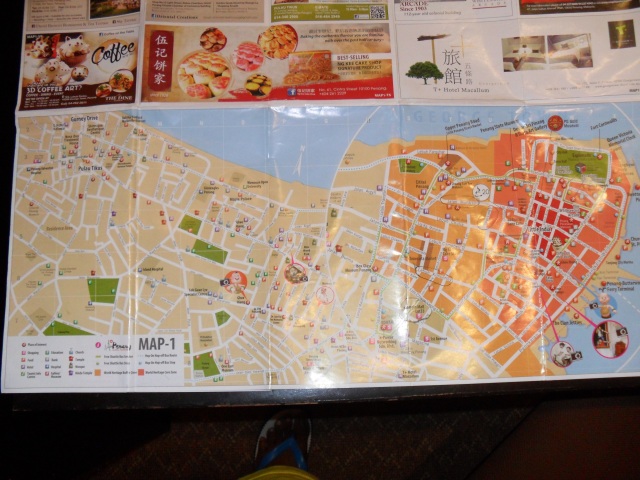 My map that I used to explore Georgetown in Penang

That evening, I had some issues with connecting my iPad to the hotel wifi and the front desk asked me to bring the device downstairs so they could troubleshoot.  I’m so glad they did because I saw a whole family of Black people!  Husband, wife and 2 kids.  They were standing by the front desk.  I tried to keep cool; I tried really hard not to run up to them screaming and crying in ecstasy.  Instead, I calmly walked to the front desk, stopped beside them and said, “Excuse me, I just wanted to say hi because you are the first Black people I’ve seen in 2 months.  Please don’t think it’s weird but I’ve been in Banda Aceh and I’m the only Black person there so I just had to say hi.”  They graciously decided not to act like I was weird.  Apparently, they live in Singapore and face the same issue there – #TheStruggleIsReal!  We chatted for a few minutes then went about our business.  I didn’t see them again for the rest of my visit.  But what a nice way to end my first day in Penang.

On Monday morning, I arrived at the Indonesian consulate at 8:35 am, 25 minutes ahead of their opening time, and joined the line that had formed by the entry door.  There were maybe 50 or 60 people waiting and when the security opened the very narrow door at 9 am, the pushing and shoving was not to be believed.  And I was in the thick of it because I was in the (totally irrelevant) line near the door.  I could not believe that people wanted to go to Indonesia so badly!  The shoving got so bad at one point that I snapped and shouted at the entire crowd to, “Stop!  Just stop!  Stop right now!”  Surprisingly, they did; I think they were just reacting to the shock of someone speaking up at the madness.  The man who was shoving me at the time that I shouted laughed and said something about the Black woman saying to stop (he spoke in Malay so I’m guessing that’s what he said because I for sure heard “Black” and “stop”).  I turned to him and said, “Yes!  Stop!  What’s the point of pushing and shoving until someone gets hurt?  And you know what?  Don’t touch me.  Back up off me and DO NOT TOUCH ME!”  He stopped laughing and I screwed up my face and proceeded into the consulate, where I conducted my business with some very helpful Indonesian consulate workers and was out in less than an hour.  Easy peasy.

I recovered from that unpleasant ordeal in a cute, American-style coffee shop nearby, where I had a cranberry muffin, a scone and an icy passion drink.  Then I spent the rest of the day wandering around, including passing a delightful 1 and a half hours in H&M -where I picked up a few things – and consuming a delicious burger at TGI Fridays.  I must say that Aceh has sensitised me to modest dressing; I noticed that there is a lot of skin on show in Penang.  Some of the local women wear capri-length pants and short-sleeved tops, which was fine (Elbows!  Ankles!  Knees!) but I think some of the tourists go a little far, with bellies and bras on display, and I’ve never been a fan of super-short daisy dukes as street-wear.

On Tuesday morning, I picked up my passport from the consulate (I went an hour after pushing and shoving time so entry was a breeze) then continued exploring Penang, spending a fun time in the Upside Down Museum, meandering down Love Lane and Lebuh Chulia and taking in a movie at Prangin Mall.  I sipped on a Coke from McDonalds as I made my way back to my hotel, anticipating the burger and fries I would have for dinner.

Fun times at the Upside Down Museum!

I was back in Banda Aceh by noon the next day, after a lovely 3 days away.

So what did I like about Penang?  In my opinion, Penang is a wonderful balance between old and new.  A walk down any street will give you sights of beautiful old buildings adjacent to glass and steel high rises.  There are signs of growth everywhere, with lots of building and road construction going on.  The American-style malls and eateries are also a welcome sight for a Westerner like me who has not been loving Acehnese food in general.  And while the staring still happened, it was far less frequent and far less uncomfortable than in Aceh.

Additionally, I enjoyed the luxury of my hotel.  I would classify it as 3-star by Western standards and definitely not in the ‘luxury’ bracket but the bell staff were super-nice (especially the 1 who asked me how come my dad, Usain Bolt, is so tall and if it’s because of what he eats – I said, “Yup!”), the property was really nice and my room was very comfortable.  I showered from an actual pipe in an actual spotless shower with actual hot water; flushed toilet paper down the toilet just because I could (tee hee!); slept on a decent mattress (it was a little hard but you know that didn’t lose me any sleep) with 4 pillows (love, LOVE a mountain of really good pillows); put on exercise tights and a t-shirt and worked out in a proper gym with weights and everything.

Yes, my 3 days in Penang were sublime.  I can’t wait for my next visa run.